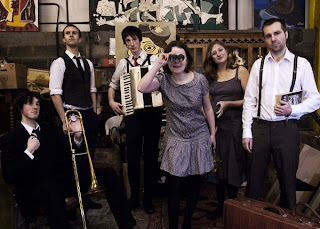 Which state is that then? Glasgow, the state capital of indie.
What flavour of indie? Not a million miles from their label mates Wake The President, or even Electric Honey alumni Belle and Sebastian, only with orchestral augmentation that includes cello, glockenspiel, trombone and clarsach.
Clarsach? Nope, me neither.
Sounds a bit Fence collective: You could happily file this next to your Alasdair Roberts albums, although it would fit perfectly between Lambchop’s Nixon and Eels’ Daisies of the Galaxy.
Is it depressing? Not at all. This a sweetly drowsy song about first love, remembered with a lugubrious humour:

Saucy! Try this for size, then:

You showed me your appendix scar
I could show you nothing
Except my red, red, red…face

Excellent! Electric Honey’s the best, isn’t it: Luckily, you have forgotten about Biffy Clyro. But we cannot forgive them.
Shouldn’t it be “let’s” not “lets”? Blame punk rock or falling educational standards, but for a song this good I think we can overlook their ignorance of the imperative mood.
Posted by Fire Escape at 12:30 pm 4 comments: 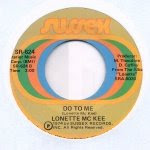 
It’s 1974 and the sound of soul music is SEX. Anyone who thinks the distaff reaction to Marvin’s 1973 call to bed, Let’s Get It On, or Barry "The Mountain Of Mounting" White’s I've Got So Much Love To Give was to divest themselves of their cumbersome clothes and recline legs akimbo on a water bed, can't have heard Lonette McKee’s Do To Me.

A hymn to concupiscence and gratification, Do To Me sees Lonette McKee cajoling her man to forget his hang-ups and enjoy the pleasures of the flesh.

Yes, this feminist anthem of free love suggests that Lonette McKee would have burnt her bra if she'd ever worn one.

Do To Me's mid-tempo crossover soul would fit right in after the necktie-loosening floorfillers have got everybody’s blood pressure pumping and just before the slow-paced erection section at the end of the DJ’s set.

Oh, if the song –particularly the keyboard - sounds slightly slow, all copies of this record I’ve heard play like this.
Posted by Fire Escape at 10:48 am No comments:

for your listening enjoyment: muffled singing! loud guitars! and 30%more feedbacK than the leading brand!

For anyone missing The Bridge Gang’s sonic chaos or the fury and, uh, dischord of 80s American hardcore, then Dead Dog's fiercely dissonant chiming - the product of punk rock played fast on Rickenbacker guitars - will press all the right buttons.

Their eponymous debut album is eight songs long, plays at 45rpm and is over in a quarter of an hour. Not a second is wasted in this rabid, vehement maelstrom.

A cover of Daniel Johnston’s Hate Song points to a deeper anguish underlying this maniacal riot, but songs like Dead Dogs Don’t Mind and Return Of The Living Dead show this trio are having a blast and their infectious brio is enchantingly – perversely – infectious.
Posted by Fire Escape at 9:49 am 3 comments: 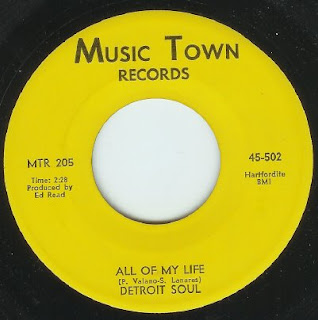 All Of My Life mixes the swing of club soul and the pounding rhythm of Northern soul with teenage romantic despair and longing for one almightily essential track. It’s been issued on a few compilations, so for those of you who already have it, here’s the b-side, Mister Hip, as well, which has never been given the reissue treatment.

An inventive instrumental with – naturally – much applause, I wonder if this song got the acid jazz or rare groove crowds excited twenty years ago. It should’ve done. My five pounds says that Ally turned a shoe to this in Soho back in the day and that the walls of Landcroft House will be throbbing to the sound of Mister Hip this weekend (goatees optional).

We had a regional hit record, produced by Ken Griffin on Music Town records, called "All Of My Life" in the summer of 1967. We recorded it at Wallingford's Syncron (sp) Studio. The "Detroit Soul" was a staple at the Good Guys All Family Outings at Riverside Park and won all the Battle Of The Bands, including one over Al Anderson's Wild Weeds (No Good To Cry). By the way, I also played in a band that appeared "Live" at one of Ron Landry's record hop gigs. We were called "The High Tones" and I was a guitar player in junior high school. 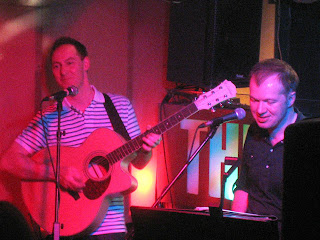 Edwyn played an acoustic gig, assisted by Roddy Frame, last night at the Social. Harvey Williams, who took the photo, said it was “a real honour to be there. Edwyn is looking & sounding better every time I see him. Also: it's strange how indie pop is probably the least cool musical genre ever, yet there I was in a room full of meedja types punching the air & whooping it up to Falling & Laughing. A faith restorer, really; even more so than a traditional Edwyn show.”

Harvey, along with The Lodger, Strange Idols, Pocketbooks and many more, will be playing at an Edwyn Collins tribute night at the Social next Monday, 16 June, each covering an Edwyn or Orange Juice song. 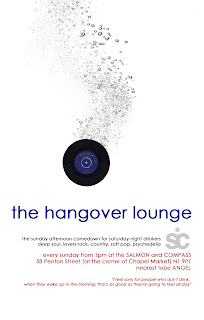 If that’s not enough Harvey action for you – and why should it be? – Harvey will be DJing at the Hangover Lounge this Sunday afternoon, 15 June, at the Salmon + Compass in Angel.
Posted by Fire Escape at 3:58 pm 5 comments:

Paul Morley is both fascinated and confused by the number of different musical genres that exist today.

In this four-part series, he sets off to find out where all of these new genres have come from and what, if anything, do they mean to music fans today.

Each programme finds Paul talking to current champions of a new music style and the artists that have influenced them.

Tune in to find out everything you ever wanted to know about psych-folk, glitch, twee, post-rock, emo and perfect pop in the company of Lou Reed, Billy Bragg and Bernard Butler amongst others.

I'd probably have greater enthusiasm for this programme if the presenter weren't "confused" by the subject. The clever money's on a descent into cliches and misreadings, but I hope indiepop's political fire is examined and clueless, bandwagon-jumping neophytes are bitchslapped. I won't find out. I'll be at the Absentee gig.
Posted by Fire Escape at 1:34 pm 5 comments: 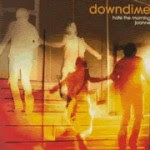 In the three years since their intriguing, promising debut ep, Seeds of Hopelessness, Leeds’s Downdime have tightened up their act.

New single, Hate The Morning, sees Downdime swap Super Furries’ wayward keyboard whimsy for Rocketship’s frantic pop and marshal their psychedelic tendencies with some of that deliciously direct and brutal guitar strumming that the Wedding Present did so well 20 or more years ago.

Their excitably rampant turmoil suggests they might have listened to the odd Flaming Lips record in the past three years. On the strength of this second single, which you could file quite happily next to your Pains Of Being Pure At Heart ep, their third release had better come quickly. 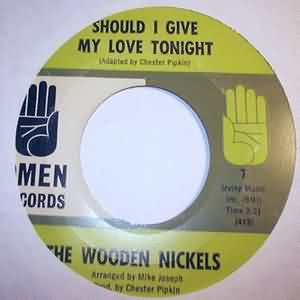 Patrice Holloway, one of the finest of all soul singers, has never had a career retrospective issued: this is not just an oversight, it’s both an insult to her legacy and an injustice for music fans.

Her trio of singles for Capitol in 1966/7 - Stolen Hours / Lucky My Boy; Love And Desire / Ecstasy; Stay With Your Own Kind / That's All You Got To Do – is one of the greatest runs of three singles by anyone, ever.

Patrice’s year of birth is a matter of dispute, but what’s clear is that she was a teenager when she made these records. Before her Capitol soul classics, she made a great double-sider with her older sister, Motown star Brenda Holloway, and Sherlie Matthews as The Belles, the storming Don’t Pretend/Words Can’t Explain (1966) and a couple of singles for Motown’s VIP label, the second of which, 1964’s For The Love Of Mike, was criminally shelved.

With her sister and their cousin, Patty Hunt, they released two singles as The Wooden Nickels. Nobody But You gets the Northern crowd excited, but it’s 1965's Should I Give My Love (never reissued, sadly) that I’m uploading. Channelling the teen melodrama of the Shangri-La’s, the sexual trepidation of The Shirelles and the symphonic bliss of Spector (yes, that is Tchaikovsky’s 1st Piano Concerto you can hear), Should I Give My Love is, like almost everything Patrice Holloway recorded, brilliant.

Patrice Holloway recorded her final solo single in 1972 and continued her music career in the background as a session singer. She died in 2006 of a heart attack. The Rev Frank Wilson (yes, that Frank Wilson) delivered her funeral eulogy.
Posted by Fire Escape at 1:46 pm 4 comments: 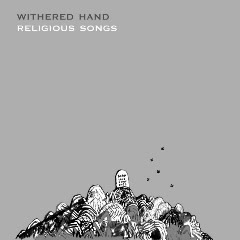 More one-man band greatness arrives in the form of a bloke called Dan from Edinburgh, who’s got the unsettling abrasion of Pet Politics and the wrecked charm of Agent Simple.

Religious Songs is an intense, eccentric, bittersweet and very wry ep. Unsteady guitars, wounded sentiment and tipsy violins reveal an emotional screw-up with a strong-enough hold on reality to channel the bitter and the sweet in equal measure.

Keep an eye on Withered Hand because on the basis of this very strong debut there’s a good chance that one day Dan will make a clock-stopping album to file next to Moving Up Country, American Water or Farewell Sorrow.

Favourite lines? There are many. But here's a few from the ep:

I’m getting the words wrong
My hair’s getting too long
And they’re saying
‘How does he really expect to be happy
When he listens to death metal bands?’

You stole my heart and I stole your underwear

The single will be available on 23rd June 2008. The lovingly packaged 7” only single will have a limited run of 1500 copies.

In the spirit of the great Postcard Records sleeves of old and as a nod to the independent aesthetic, attitude and ethos that Edwyn inspired in the first place, each of the artists have customised a fold-over paper 7” sleeve which features one of Edwyn’s distinctive pencil drawings; Edwyn has learnt how to draw with his left hand as part of his recuperative therapy.

In the Willy Wonka Golden Ticket tradition, the complete run of 7”s will then be sealed, among which will be the 25 specially customised sleeves, and then placed, at random, in a selection of record stores across the UK giving the public a chance to get hold of a highly collectable piece of original artwork for the cost of a 7” record.

In these digital times, Edwyn & Heavenly also fancied bringing a bit of fun and romance back to buying a single. You’ve got to go to a record shop to buy the single.

Copies of the sleeves will all be displayed at an exhibition at The Social in London, opening on June 9th at 5.30pm. The sleeves will then be on display for 4 weeks. The night will also feature an acoustic performance from Edwyn and DJ sets from Andrew Weatherall & Pete Fowler.

The profits from this project will be donated to Connect, the aphasia support organisation who helped Edwyn during his recuperation following his life-threatening cerebral haemorrhage in February 2005.

All sleeves can be viewed and updated information about the release and the list of participating shops can be accessed via Edwyn’s website,
www.edwyncollins.com

The single will be available at the following stores:
ABERDEEN
HMV
One up