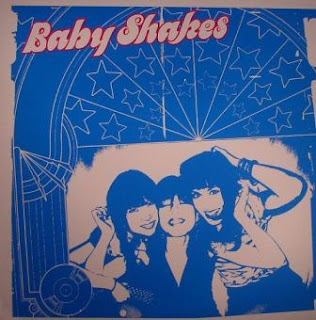 Remember in Happy Days how The Fonz used to punch the jukebox and a song would magically start playing? Well, if The Fonz had really had the magic touch, every time he hit the jukebox a Baby Shakes song would’ve blasted out.

The First One revels in 50 years of rock’n’roll and delights in twanging guitars, simple riffs and the equally simple emotions of high school romances. These songs are deliciously short, sweet and no matter how many times you’ve heard similar tales of infatuation (“I met a nice boy, he caught my eye, I knew right away it was love at first sight”) or wide-eyed ambition (“I’m on my way, tell the world, I’m gonna break out of the city”) Baby Shakes always sound fresh.

This NYC-based trio's easy pop gift and abundant charm show an appreciation of punk, new wave and power pop – Ramones, Buzzcocks, Undertones and Raspberries influences feature; wonderfully, they even cite Protex as an influence – but The First One is really the joyous distillation of half a century of rock’n’roll giddiness.
Posted by Fire Escape at 2:24 pm No comments:


John Peel once said that he preferred the bands that “say no to life”. He’d have loved San Diego’s Muslims, whose solipsism means they hate everyone and say no to everything. “I don’t want it/I don’t care/Whatever you’re selling” (On My Time); “Why don’t you all just call it a day/You try so hard doing what you’re told” (Call It A Day); and, perhaps best of all, the slating of over-hyped bands and the lonely folks that hype them: “Everybody’s talking but they’re not saying anything at all/Yeah, what’s that you say/Don’t let it go to your head, that’s all/Everybody wants to be in the know/Everybody wants somewhere to go/Everybody wants something to do tonight” (Future Rock).

For the sleeve of their invigorating, eponymous 7-track mini-album, The Muslims’ label boss got his dad’s mate, a former cop, to shoot police bullets at the plain white sleeves. Like The White Album, then, only cheaper and dirtier and shorter, and with the benefit of The Modern Lovers’ driving drone, The Stooges’ barrelling blitz, The Stones’ trebly rebellion and The New York Dolls’ sneer for inspiration.

There are traces of The Fall’s bile and The Clean’s primitive garage jangle in The Muslims, too, but for anyone wanting The Modern Lovers’ Longbranch Saloon sound, this will meet all your needs.
Posted by Fire Escape at 2:10 pm 1 comment: 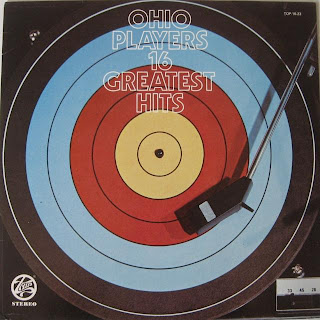 There are two superb versions of Love Slipped Through My Fingers, both produced by Johnny Brantley and neither getting the exposure they deserve.

The Ohio Players' version, released on their 16 Greatest Hits album in 1976, 8 years after it had been recorded, just edges it for me over Sam Williams' take, which never made it past the promo stage originally, partly because the busier arrangement reinterprets the deep soul template with punchy horns, funky percussion and an uptempo riff.

What really clinches it, though, is Towanda Barnes’ vocal, which strains to the point of breakdown. Stirringly effective like Linda Jones, achingly forlorn like Martha Reeves, desperately intense like Shara Nelson and crushingly heartbroken like Roddie Joy, Love Slipped Through My Fingers will haunt you.

NB – someone bootlegged this song 4 years ago, labelling it by Towanda Barnes. It’s the same version as The Ohio Players; you can find it easily on ebay, although as it never goes for less than £20 it’s a bit much for a boot.
Posted by Fire Escape at 11:58 am No comments: 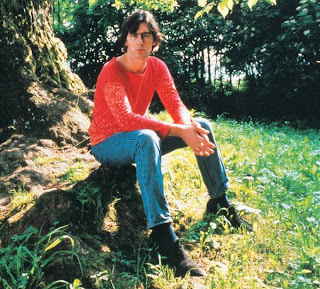 Head Full Of Steam is Robert Forster’s most evocative lyric and – here I will have to disagree with Forster’s mum, who thinks People Say is the best song he’s ever written – his best song. The highlight of his recent London gig was Forster and band tearing into Head Full Of Steam with an absolute venom absent from other renditions I’ve heard.

Here’s The Go-Betweens playing Head Full Of Steam at the Hamburg Logo, 31 October 2000, which approaches the song in a countrified way redolent of Forster’s Warm Nights album. If anyone’s got a recording of the recent QEH gig, I’d love to hear it.

If you haven't seen the video for Head Full Of Steam, you should if only to decide whether Forster in 1986 was a proto-Jarvis Cocker or a lanky Prince.
Posted by Fire Escape at 1:21 pm 2 comments: A small team of art students from Blackburn College filmed this performance and interview with Robert Forster on 24 September in Lancaster as part of the Loud In Libraries series where groups perform to a small crowd in a working public library. The film was produced by Jamie Holman [of The Fischers] and is the first in a series of documentaries made specifically for The Saatchi Gallery Magazine Art & Music.

You can watch the interview and the acoustic performance of Did She Overtake You here.

Photo credit
Posted by Fire Escape at 3:46 pm No comments: 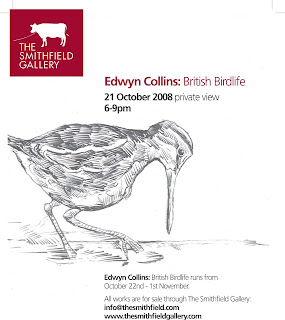 "Edwyn Collins: British Birdlife" opens to the public on October 22. There's a preview the day before for press and eager purchasers.

I've cropped the invite as I imagine the PRs don't want their email addresses advertised, but I'm sure enterprising collectors can work out how to get into the preview.
Posted by Fire Escape at 12:28 pm No comments:

The one constant in Davy Henderson’s output leading Fire Engines, Win, The Nectarine No 9 and, currently, The Sexual Objects is inconsistency. Maybe it’s Henderson’s recrudescent Beefheart influence (never works for me) or the self-proclaimed love of total destruction that’s off-putting; but when he’s at the top of his game, as on Here Come The Rubber Cops, he’s practically peerless.

The third Sexual Objects single, and their second great one – last year’s Full Penetration debut is a must; 2 out of 3 is a good strike rate, particularly when the strikes are this good – Here Come The Rubber Cops has the attractively louche narcotic drawl of Lou Reed, and sounds like Prince taking on The Only Ones.

You can hear a bit of Marquee Moon’s apocalypse – the darkness doubling, lightning striking itself – too, but the greatest accolade for Here Come The Rubber Cops is that it would easily make the cut on a Davy Henderson best of.
Posted by Fire Escape at 1:25 pm 5 comments: 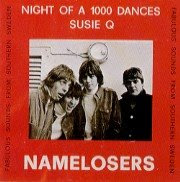 Some homework for anyone going to see Rolling Like A Stone at the Barbican on Tuesday. Two songs by Sweden’s Namelosers – a radio station had a competition to rename them from the Beachers, following legal threats from the more-established Beachers; “Namelosers” was the winning entry. 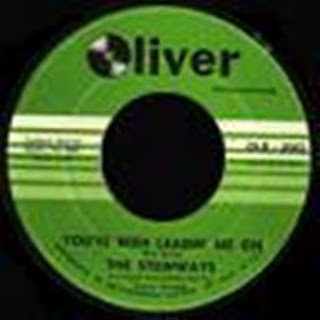 Northern Soul collector Jon Clay came to the Hangover Lounge recently armed with a box of 45s and played a few storming sets. Yes, he really did have You've Been Leading Me On by The Steinways on 7" (me: "Nice"; Jon: "Yeah, I had an argument with my girlfriend so I stormed off and shelled out £160 for The Steinways"; me:"That'll learn her"; Jon: "If I'd paid for it using her money, maybe, but I didn't"; me:"Oh").

You can download the podcasts here. And you can come to the Hangover Lounge every Sunday from 1-7pm at the Salmon and Compass, Chapel Market, Islington to hear the perfect music to calm your minds after a hard Saturday night's drinking, and stave off the dread of the week ahead.

Set 1
A pretty straightforward Northern set to get things going...!

Set 2
Something a bit different...

Betty La Vette // What Condition My Condition Is In
Pearl Woods // Sippin Sorrow
Earl Grant // Hide Nor Hair
Gail Anderson // My, My, My, What A Guy
Ben E. King // I Can't Break The News To Myself
Ike & Tina Turner // Dust My Broom
Spencer Wiggins // I'm A Poor Man's Son
Marke Jackson // I'll Never Forget You
The Constellations // I Don't Know About You
Connie Clarke // My Sugar Baby
Judy Clay // You Busted My Mind
Little Hank // Mister Bang Bang Man
Jimmy Delphs // Almost
Willie Harper // But I Couldn't
The Steinways // You've Been Leading Me On
Bo Diddley // Greatest Lover In The World
Little Richie // Just Another Heartache
Clyde McPhatter // Lonely People Can Afford To Cry
Lou Johnson // Unsatisfied
Candi Staton // How Can I Put Out The Flame
Roy Hamilton // Crackin' Up Over You

Set 3
Another pretty straightforward Northern set to finish things off!

Shape Up And Dance With Billy Bragg 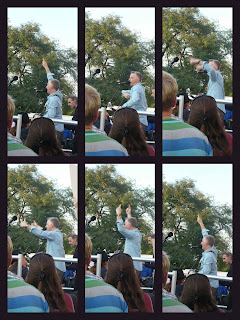 Billy Bragg encouraged the good folk of London to play and sing along with him (one of the few times where the crowd's singing is more tuneful than the artist's...) at his Even Bigger Busk on the South Bank on Saturday.

I stumbled across it serendipitously, and was very happy I did. He played:
Keep on Running
Mr Tambourine Man
Walk On The Wild Side
Foundations
A New England
Stand By Me
Wonderful World
One Love
Medley (Louie Louie, Wild Thing, Guantanamera, Get Off Of My Cloud)

For One Love, Billy invented a simple dance routine for the "One Love/One Heart/Let's get together/And feel all right" refrain, as you can see in the photo above. Remarkably, some people got it wrong.

(Photos by Mrs FET)
Posted by Fire Escape at 1:58 pm No comments: