Ripe's 1989 debut, We're All Trying To Get There, has gone down in indiepop folklore not only for opening Summershine's account, but because just under 180 playable copies came back from the pressing plant.

We're All Trying To Get There has been reissued on a compilation, but its b-side, End, has lingered in obscurity for two decades. So here's your chance to download it.

Following this single, Ripe changed tack with the indie-dance of Sapce Suit 42 single (very good) and the Filterfeed album (don't play it that much but it has its moments). I lost interest after their single for Shock, The Most (there were only so many bands in the Swervedriver mould of shoegaze and grunge I could handle - that is, none) although subsequent work on Beggars and Sub Pop was popular with young folk for whom personal hygiene was a low priority.

Following a 10-year break, Ripe reformed in 2006, but their new material, while no great departure from where they'd left off, received mixed notices, possibly due to it sounding rather dated.
Posted by Fire Escape at 3:37 pm 8 comments:

This Perth band had just one release, a 4-track 12” on Easter Records, which was co-run by Kim Williams (whose own Summer Suns were on Easter – it’s about time someone released a compilation of Easter’s fine output…). Stolen Picassos sound, as many indiepop bands in 1987 did, like they probably revered Jim Beattie as their guitar hero.

All four tracks on the ep are brilliant. Here’s one, Little Words. Stolen Picassos made no more records, although they were scheduled to have a single out on Bus Stop in 1989. One of the SPs, Brad Bolton, turned up in short-lived but much-loved The Rainyard, though I don’t know what happened to the others. If anyone’s got any unreleased material, please share it.
Posted by Fire Escape at 2:20 pm 1 comment: 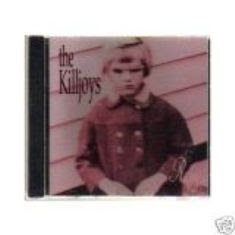 The Killjoys have never quite got the attention they deserve. Their 1990 debut album, Ruby, has one of the great lost indiepop songs – and the only one with a vibraphone solo – The Greener Side.

I saw them live in their native Melbourne 9 years ago.
“Will you play The Greener Side?”
“No.”
“B-but I’m over from London, this is my only chance to hear that song live.”
“Sorry, mate, we just don’t play songs that old.”

Five minutes later they played Fall Around Me, the single taken from Ruby. BASTARDS. Still, Fall Around Me is pretty nifty itself.

The Killjoys' Craig Pilkington might be familiar to some of you for his production and orchestration on the last three Lucksmiths albums.
Posted by Fire Escape at 11:06 am No comments:

Catherine Wheel revealed Honeys bassist Grant Shanahan to be a great songwriter himself. 19 years on, I still can’t decide which is the better side of their debut, Blue Avenue or Last Explanation, so here’s their other single, Almost Blind.

Begley turned up a year later fronting the Snow Leopards; Andrea Croft sang on one track, although the album doesn’t do a lot for me in comparison to Catherine Wheel’s understated pop masterclasses.
Posted by Fire Escape at 1:48 pm No comments: 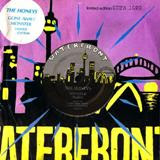 The Honeys recorded their debut album in Perth with a $1000 Arts Council grant. Goddess, released by Waterfront in 1988, is an uneven affair but had some strong pop songs that hinted at their potential.


Two singles followed, the second of which, 1989’s Monster, is their crowning glory. Australian indiepop fans will want to know that The Lighthouse Keepers’ Michael Dalton played the slide guitar and harmonica on this unheralded classic.

They split up soon after, before reuniting two years ago for an album, Star Baby, which drew more heavily their on alt-country influences.
Posted by Fire Escape at 4:50 pm No comments: 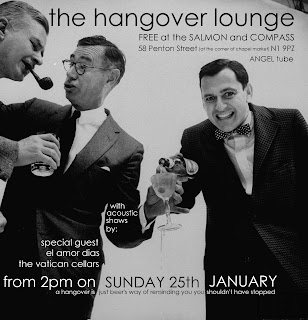 Despite what the flyer says, it's Amor De Dias - not 'El Amor Dias' - featuring Al 'Clientele' Maclean and 'Snooker' Lupe from Pipas. The Hangover Lounge's in-house designer is suffering from syphillitic madness following a weekend at San Diego Zoo.

Sunday 25 January from 2pm at London's trendy Hangover Lounge, Chapel Market, Angel.
Posted by Fire Escape at 9:20 am No comments: 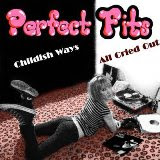 Here’s a manifesto for ya:

And that’s just the b-side. The a-side, Radio Transmitter, also shows that Memphis’s Perfect Fits are among the best of a glut of American bands currently revelling in the ecstasies of power pop’s simple riffs, snappily short guitar solos and close harmonies.

All Cried Out and Childish Ways on a split single are more– what else? - songs about girls written for car radios set to the AM dial. If you want your songs to chime with Teenage Fanclub’s melodic exuberance, The Paley Brothers’ bubblegum pop and The Undertones’ energetic buzz, you’ve come to the right place.

Twinkle VanWinkle, on the other side of the split, show their true colours with Ain’t Waistin’ Time, which has all the handclaps, apostrophes, heartache, sneering disdain and high school melodrama you could ever want from your power pop.
Posted by Fire Escape at 11:51 am No comments: 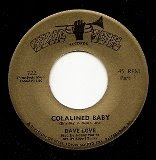 Dave Love’s Colalined Baby is a stone cold classic of finger-snappin' Mecca magic from 1970 that will get any party started (disclaimer: if the sort of parties you enjoy involve ketamine, shaven llamas and thumbscrew torture, you’ve come to the wrong party).


It’s been included on a number of compilations, but the b-side Colalined Baby Pt 2 hasn’t, so here it is. Good? Ain’t it just.

The Bats "The Guilty Office"

The Bats' seventh album, The Guilty Office, is more of the same and just as good. Freshly scrubbed jangling guitars, nods to The Byrds’ totemic pop before they saddled up their horses and Robert Scott’s captivating vocal susurrations.

Like most Bats albums, The Guilty Office is a collection of songs that are largely one-paced. Remarkably, that pace, that execution and that one idea has sustained The Bats for 25 years. Truly, if it ain’t broke, don’t mix it.

Two songs, though, do stand out. Castle Lights captures the ache and quiet string-swept grandeur of Neighbours from and here is…’Music For The Fireside’; and The Orchard is, simply, one of the greatest pop songs Robert Scott has ever written. I wish he’d write more out-and-out pop songs.

Still, he’s busy enough playing in a post-punk covers band at weddings (the songs of Jonathan Richman, The Ramones, Devo and Joy Division can be played live at nuptials in New Zealand) and teaching music to primary school kids…

The Guilty Office is out now on Arch Hill in NZ and will be released on various labels in Europe and the US in late Feb/early March.
Posted by Fire Escape at 5:30 pm 6 comments: 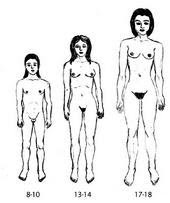 Dum Dum Girls' eponymous debut ep on Zoo Music sounds like it was recorded on the cheap with battered guitars, biscuit tins for drums and the distortion pedals set to fuzz, feedback and fuck-off pop. You wouldn’t want to change a thing about it.


They have the Mary Chain’s saturnine snarl, The Ramones’ mastery of brevity, Black Tambourine’s ramshackle thud and The Shangri-La’s melodramatic poise. What’s not to love?

Zoo Music’s other release is a 7”, Neon Jesus by Crocodiles: if krautrock’s tribal rhythms, the Modern Lovers’ velveteen drone, Suicide’s electronic disturbances and punk’s trash aesthetics appeal to you, you’ll love this band.
Both Dum Dum Girls and Crocodiles have busy release schedules this year. On the basis of these opening salvos, they’ll be setting the scene in 2009.
Posted by Fire Escape at 9:22 am 5 comments: