Since last summer when I’m From Barcelona announced their arrival on the London stage at Jamm in Brixton in a fanfare of party tunes blasted triumphantly and a cornucopia of balloons and confetti strewn with the fist-pumpin’ celebrations of a major-title winning sports team, nothing much has changed.

Every gig is still “the last day of school” with IFB and every gig it’s still songs almost exclusively from the debut album. Now, I wouldn’t mind so much, but this does mean playing We’re From Barcelona twice – the second time is an oddly distorted techno version that sounds horribly like Rednex’ Cotton Eye Joe– and the frenzied, communal party atmosphere at times lends itself more to motivational speaking than pure pop explosion.

The Painter, with its insistent, singalong refrain, “Don’t give up on your dreams boy” now causes me to think that I’m From Barcelona is nothing more than – shudder – Christian Rock By The Back Door.

We didn’t stand for Sixpence None The Richer – after Kiss Me, there was a poorly received cover of There She Goes and we saw no more of them (the singer revealing, distastefully, to Melody Maker that she pissed on herself everyday in the shower mightn’t have helped) - and we shouldn’t stand for this.

Stuart Murdoch may have continued to work as a church janitor after Belle and Sebastian received some attention, but did he turn their songs into rallying cries for the Christian movement? No, he sang about sexual aids in The Boy With The Arab Strap, and so forth.

Nonetheless, I enjoyed the gig. But I would be happier with a public statement clarifying the band’s position on religion. I don’t like to think that the kids are being brainwashed, but there is something Christian Rock about this band that I find very unsettling.
Posted by Fire Escape at 2:20 pm 4 comments:

Rejoice! Ring out the bells! The Manhattan Love Suicides album is out on vinyl, courtesy of those fine folk at Squirrel Records.

MLS probably have blood in their bathtub, slime running down their walls, use a severed foot as a doorstop and if they came to your house party they’d be the last to leave, the bins would be emptied and your dog impregnated, but in the howling gale of noise and the blistering fuzz guitar there’s the sweetest noise.

They say they like the Shop Assistants and you can hear Safety Net’s DNA stamped all over this album; similarly, they dig Galaxie 500 (like, who doesn’t?); The Fizzbombs – now tell me you can’t hear Sign On The Line’s rampant, boundless, fuzzed-up energy in these songs; and Beat Happening, whose naïve, straightforward simplicity they take a cue from, even covering that band's Indian Summer.

After all that, the closest touchstones are The Jesus and Mary Chain’s unholy blend of whiplash guitars playing Brill Building pop and the Velvet Underground’s feral, deadbeat, nocturnal noise.

In fact, they say they like “all the good stuff” and it certainly sounds like it, but we’ll have to bring them up on numbering “The Fat Tulips” in their list of good influences. They are not good and no amount of Chinese water torture or strapping electrodes to my bollocks and frying them at high voltage will get me to say otherwise.

The vinyl version of the album has two extra tracks – ain’t that sweet for all us vinyl lovers – the first of which, Wolves, starts the album by using – well, of course – the Be My Baby drumbeat. It then goes on to “borrow” “substantially” from Neil Young’s After The Goldrush. Along with Fugu ripping off Til The Morning Comes (oh yeah, St Etienne covered Only Love Can Break Your Heart 17 years ago, making them ahead of the pack) maybe now is the time that Young’s album gets the recognition as one of the very finest. Or there’s just a very long-comin’ tribute album in the works.
Posted by Fire Escape at 12:55 pm 4 comments:

Confirmation, were it needed, that the world’s gone mad. Or, at the very least, someone’s gone completely crazy. 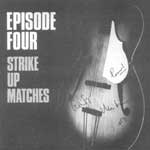 Asking £400 for Episode Four’s Strike Up Matches ep is a bit, uh, rich, wouldn’t you say? A copy did sell for £225 a couple of years ago, but going to almost double that is madness. I hope no one buys it at that price.

Ebay has opened up new worlds to the pop watcher: a new catch-all category, “C86”, which relates to melodic indie, and some very wealthy people with pots of cash to spend on rare indie pop (£300 for Falling and Laughing, sir? One such was sold last year; the year before that, too).

As far as I’m aware, only one song from the ep has been issued on CD and this is probably driving up the price. If you want a copy of your own to download, just say and I’ll ysi the ep over the weekend.

It might dampen the fever around this record; it’s a decent enough record but it’s not nearly as good as those peerless East Village releases.
Posted by Fire Escape at 4:42 pm 8 comments:

Seven years ago, right after Disco 2000 had been retired from back-to-back radio broadcast, the kids or the music press (not both; it never works that way), decided that Britpop was dead (conveniently forgetting that it died one weekend in August 1997 when 659,761 people took their copies of Be Here Now home, played it, thought ‘what is this crap?’ and vowed never again to buy blustering, soulless rock sulked until they bought The Verve’s Urban Hymns in October) and that Starsailor were the saviours of rock’n’roll.

Thus, the New Acoustic Movement was born. Tragically, this deformed creature wallowed in the shallow end of the gene pool and smote us with the lumpen offerings of Coldplay and Travis with a side order of Turin Brakes (for God’s sake, does no one think of the children?); any band who’d failed to buy into the nonsense of Oasis as the second coming of The Beatles, or a cool minority who knew Let’s Make This Precious by Dexys (“No not those guitars they’re too noisy and crude…There’s no need to turn it up, If it’s pure I’ll feel it from here”), were all part of a mythical new movement.

A year later, Kings of Convenience claimed “Quiet Is The New Loud” too late in the day and Badly Drawn Boy won the Mercury Music Prize as a swan song, and the music press remembered that bluster and rock and sweat was their business, so The Strokes were the second coming and if you didn’t dye your hair black and buy a Black Rebel Motorcyle Club record (it didn’t matter which one, they really all were the same) then you should buy a leather jacket and a Libertines record (gramme of heroin optional).

The quiet bands continue to come, of course, and in Shady Bard we have something special; just as strong, perhaps even better, is the criminally neglected The Library Trust. The sound of life in a northern town, the Bonnie Prince Billy of I See A Darkness vintage with a nod towards The Field Mice’s more tender moments like So Said Kay, the band is one Robert Edwards, now residing in Manchester. 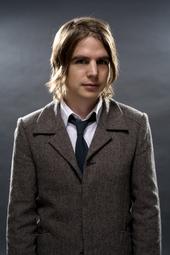 It would be stretching things a little, I think, to put The Library Trust in with Manchester’s survivors of that new acoustic movement, Badly Drawn Boy and I Am Kloot (let’s face it, the only survivors from a nuclear war would be IAK’s Johnny Bramwell and some cockroaches).

The Library Trust’s understated pop, all brittle and fragile like it might snap from the cold but for its shy, poetic warmth, was brilliantly showcased on the Build Your Own Snow Globe ep and The A to Z of Mathematics album. Hopefully, there’ll be more soon.

This year, so far, quiet is the volume of choice. A new Alasdair Roberts album next week – fingers crossed it matches Farewell Sorrow, to my mind 2003’s best album – suggests things are going to be quiet in a good way for a while.
Posted by Fire Escape at 4:29 pm No comments:

The year’s first classic gig happened last weekend in the breathtaking surroundings (it sure beat the likes of the Betsy Trotwood and the Garage) of St Giles-in-the-Fields church in the centre of London.

Shady Bard, whose Penguins single late last year was an inviting rather than inspiring debut, showed they had a lot more to offer. Displaying the same resonant soulfulness of latter-stage Tindersticks, the spacious tear-in-a-beer alt-country of Sparklehorse and the out-there woozy melodies of Gorky’s, Shady Bard have shaped up to be one of 2007’s contenders.

An album on Static Caravan at the end of April showcasing the Shady Bard orchestra of violin, cello, French horn and piano could see them – if they translate their fuller, muscular sound to the studio – deliver a classic debut album. It often pays to get to gigs early to see the band at the bottom of the bill (although they were the band I most wanted to see, they were much better than I expected).

The Clientele’s new songs sounded good, apart from two of them, which were, bizarrely, both Daydream Believer by The Monkees. It makes a change, I suppose, from one of Lou Reed's VU ballads. 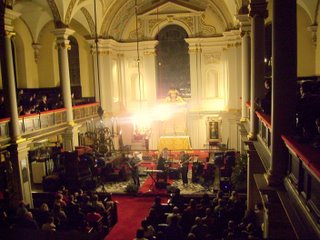 Sodastream were good as ever and they came equipped with some tall tales from recent travels. My favourite was the one about the man who claimed to have killed a dog with a single punch. I’ll probably go to see them next Saturday as Airport Girl and Monkey Swallows The Universe are also playing. 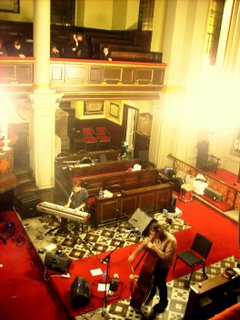