The House Of Love

“For five years, I crisscrossed the country (at my own expense, I want you to know) reviewing everything from Bob Dylan at Wembley (awful) to post-punk bands with silly names I've forgotten in venues without a single one of the emergency exits required by law (often rather good).”
John Peel, remembering his stint as a reviewer for The Observer.

In the midst of almost dying of boredom at Dylan and dicing with death on the toilet venue circuit, Peel saw The House of Love in 1988 and declared it one of the best gigs he’d seen.

I, too, was fortunate enough to see The House of Love in 88 and can confirm it as one of the best gigs I’ve ever seen; My Bloody Valentine played right after (or was it before? It was such a long time ago…and it was mighty loud, my brain’s still rattling) and were similarly amazing.

I very nearly didn’t get into that Doing It For The Kids gig at all, despite getting there several hours early. Being young, naïve and far more decorous than I could ever claim to be now, I declined to enter the scrum that formed when the doors finally opened. In desperation, I asked some strangers – admittedly, ones who I'd clocked had a scam running – who relieved me of five pounds in return for borrowing an AAA sticker.

“Come round the back entrance with us. Anyone ask, just say you’re the roadie for Felt,” one of them said (I think the two gentlemen involved in this scam were members of rock group Blow Up).

The bouncer didn’t ask, so I never got to say with calm authority, “Hands off, ruffian, I’m Felt’s roadie. Excuse me, I have a Fender to tune to ‘jangle’, a crate of beer to quaff, a curry to eat and several dozen keys to attach to a belt loop.” Seeing as I was a schoolboy at the time, I doubt whether I’d have got away with it.

Anyway, I saw The House Of Love twice more the next year. The first time, at Reading, they were sub-par…a couple of months after that, they were terrible. They’d lost all the pull, all the bewitching magic they’d had.

They’d signed to Fontana in 89, you see, at a time when any indie band that signed to a major lost control of their art and was forced to make 'product' that inevitably failed commercially and artistically. Terry Bickers, the architect of the spellbinding live show was gone, the majestic debut Shine On was sanitized and cleaned of its haunting, spectral quality and later re-released, confirming that it was the bland rock band version of The House Of Love (you know, the one that reared its head on the second Creation single Real Animal, the one that you'd hoped had gone away forever) that would stalk the lower reaches of the charts for a couple of years.

But time is a great healer and I’m prepared to forgive Chadwick for numerous crimes, including those against lyric writing – “I don't know why I love you/Your face is a foreign food” anyone? – and think about going to the Don’t Look Back gig where they’ll play their debut album in full.

By the time I decide to go, it’ll probably have sold out. For those of you who are interested in such things, details of the gig and the album reissue are in this press release:

The House Of Love have announced details of the re-issue of their seminal self-titled debut album on 3rd September 2007.

The band are also set to perform the first album in its entirety when they play London’s Koko on 13th September as part of the Don’t Look Back series of gigs.

They are additionally set to re-release a compilation of early singles and rare tracks on September 3rd. This record, also self-titled, was initially released in 1988 as an import only through Rough Trade Europe and collected together the A & B sides of the bands first 2 singles, Real Animal and Shine On, plus some previously un-released tracks. The re-issue will also feature the A & B sides of the band’s seminal single, Destroy The Heart, which didn’t appear on the original album.

The band’s debut long player was first released on Creation Records in 1988 following their much-acclaimed single, Christine. The 10-track album, featuring classic tracks such as Hope, Man To Child & Love In A Car was quickly hailed as one of the definitive independent releases of the late 1980’s.

Long out of print, the re-issue will come lavishly packaged in a card gatefold sleeve featuring the definitive original artwork plus extensive new sleeve notes.

The band re-formed in 2005 to release the warmly received long player, Days Run Away. This incarnation of the House of Love saw original members Guy Chadwick and Terry Bickers re-united for the first time in over a decade. This original line up, also featuring Pete Evans on drums, will perform at the Don’t Look Back show in September.

Starting in 2005, the Don’t Look Back series features bands playing seminal album works in their entirety and the past few years have seen The Stooges perform Fun House, Teenage Fanclub play Bandwagonesque and Ennio Morricone perform some of his most well known film scores.

Since starting this blog I have racked up showbiz mates (Phil Wilson emailed!), my influence on the world of indie has been recognised to such an extent that I got a press release about something last week and John Jervis of WIAIWYA isn't always in such a hurry to "do something else" when I sidle up to him to make idle chit-chat about indiepop.

Best of all perhaps is following a post about Medium Cool, said label's supremo Andy Wake got in touch and festooned me with CDs (two! great they were and all!) and responded to my heartbreaking tale of losing the Medium Cool Autum Collection 1987 poster by searching his house, outbuildings and grounds until he found one cowering in a corner and then despatched it to me. What a gent!

I got it framed, I took down the picture of Aretha Franklin to make room and, in a scene I'm quite sure you won't have caught on Changing Rooms, one wall of the FET picture gallery now looks like this: 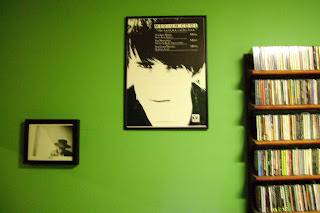 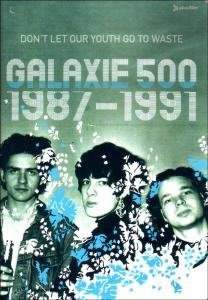 “Until the futurist Filippo Marinetti began talking about speeding up rivers, ‘the Danube had never seemed so deliciously slow’. Peering back through history, we see scenes in a kind of slow motion that did not exist then. We have invented it.”
from Faster: The Acceleration Of Just About Everything, by James Gleick

Looking back at Galaxie 500 through the simulacrum of the double DVD set, Don’t Let Our Youth Go To Waste 1987-91, the Boston trio prove themselves as one of those few bands who could stop the clocks and make the world stand still. A band who, as we know on the Fourth Of July, looked at the Empire State Building and saw that it was no bigger than a nickel.

They recorded their albums quickly, keeping in all the mistakes, and in the dizzying, buzzing live performances captured here they imposed their own beguiling and bewildering order on the world.

They were simultaneously lugubrious and writhing joyfully in cavernous noise; an especially rare expression of the avant-garde that you want to embrace and be part of (see also: Roxy Music in 72 and the Velvet Underground whenever they took off their shades).

The two unreleased tracks don’t add much to the sum of knowledge, as one’s another Jonathan Richman cover (Back In Your Life) and the other, Buzz In My Head, is a little too close to JoJo’s Abdul and Cleopatra to properly have that ghostly atmosphere and epic paranoia that would truly mark it out as a Galaxie 500 classic.

I mention all of this because the DVD - 4 (four!) hours long -is being sold for the very reasonable price of £7.95.
Just don't you all snap them up before I buy one for my mate's birthday. Thanks.
DISC 1:MUSIC VIDEOS - 4 music videos directed by Sergio Huidor-Tugboat-When Will You Come Home-Blue Thunder-Fourth of July
TAPING FOR UK TELEVISION, LondonFebruary 9, 1990-Tell Me-Strange-Here She Comes Now-Interview with the band
LIVE ARCHIVE - 20 songs from 5 shows1) Middle East, Cambridge, Massachusetts March 19, 1988-Oblivious-I Can't Believe It's Me-Back in Your Life (unreleased)-Buzz in My Head (unreleased)
2) Commonwealth School, Boston, Massachusetts April 21, 1989-Tugboat-Temperature's Rising-When Will You Come Home
3) Kennel Club, San Francisco, California March 28, 1990-Flowers-Blue Thunder-Decomposing Trees
4) Club Lingerie, Hollywood, California March 30, 1990-Snowstorm-Plastic Bird-Victory Garden-Pictures-Ceremony
5) Kennel Club, San Francisco, California October 15, 1990-Summertime-Spook-Hearing Voices-Don't Let Our Youth Go to Waste-Melt Away
DISC 2:
BOOTLEGS -
1) The Point, Atlanta, Georgia January 26, 1990-Decomposing Trees-Pictures-Don't Let Our Youth Go to Waste-Blue Thunder-Plastic Bird-When Will You Come Home-Ceremony
2) ULU (University of London), London, England November 15, 1990-Fourth of July-Hearing Voices-Summertime-Don't Let Our Youth Go to Waste-Spook-When Will You Come Home-Sorry-Melt Away-Listen the Snow is Falling-Blue Thunder-Here She Comes Now
Posted by Fire Escape at 4:40 pm No comments:

In 1981, Dexys’ frustration with EMI’s lack of support came to a head following the under-publicised Plan B single and they left the label. Without a major’s money behind them, however, most of the dates on the Projected Passion Revue had to be cancelled. A three-night residency at London’s Old Vic survived the cull and it’s one of those gigs that’s been released this week.

We should be glad. From the first bar, the first blast of horns and Kevin Rowland’s first passionate vocal this gig catches fire and burns brightly right to the close.

"Something happened and the sound of this group became spiritual, much more than the previous line-up,” Rowland writes in the introduction. It’s true that the deeper, purer soul elements that came to fruition on Too-Rye-Ay are evident, but there’s no escaping that the final words on Searching For The Young Soul Rebels prove an accurate prediction: “everything I do will be funky from now on.”

This gig is a passionate, scorching affair from the hard-hitting Tell Me When My Light Turns Green, to the blind passion and naked emotion of Burn It Down, and to the strutting, bile-laden There, There My Dear.

The only false move in the whole show is the cover of Respect, a song they never got right and one which the writer and performer of the original version, Otis Redding, was present at during its recording by Aretha Franklin: “I just lost my song,” Otis opined. A few songs can never be covered; Respect is that rare beast, a cover version that owns the original and is now the definitive reading.

Dexys did a fair few covers in their time, including the bristling soul stew of Cliff Nobles & Co’s The Horse, Chuck Wood’s quick and powerful Seven Days Too Long, and Johnny Johnson and the Bandwagon’s Northern classic, Breakin’ Down The Walls Of Heartache, with which they close the Projected Passion Revue.

Incidentally, it’s always struck me as a little odd that they never chose to cover anything by Chairman of the Board, whose singer, General Johnson, was the start and finishing point for Kevin Rowland’s fiery wail and bursting, rhotacistic style.

The reformed Dexys almost blew the roof off the Royal Festival Hall just over three years ago. The Projected Passion Revue has that same power, that same blistering intensity - it’s a reminder that, on a good night, Dexys’ vibrant mix of punk anger and soul vitriol is so strong and so seductive that every other band might as well pack up and go home.

Many new songs have been demo’ed, one of which is up at their myspace site.
Posted by hsg at 2:59 pm 4 comments: