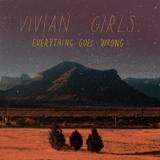 Vivian Girls will release their second album, Everything Goes Wrong, on September 8. I’m not that excited by this prospect as I quickly tired of the Vivian Girls’ rather limited range, highly manufactured, cartoon-ish image, action figure stage names and aggressive marketing of releases that seemed to be about cash rather than quality – 2009 is all about Brilliant Colors and Dum Dum Girls, right? – although the press release below suggests that there might be more substance come the second album.

Vivian Girls have had an extremely eventful couple of years as a band, from appearing at major festivals, to playing the Bowery Ballroom about a million times, to having their own question on Jeopardy. The band spoke with Pitchfork's Tom Breihan back in March while in the studio in LA working on their sophomore LP, Everything Goes Wrong, due Sept. 8 on In The Red - below is an excerpt to give you and idea of what to expect from album number two:

"Last time, the album was really rushed," says guitarist Cassie Ramone. "We were just go, go, go, go. And now we're taking our time with every step of the process, making sure we're really happy with everything before we move on."

With this band, though "taking our time" means they're taking six days to record the entire thing instead of the three days they used for their first album. Ramone says, "We recorded 15 songs, but if we put them all on the album, that'll be an hour's worth of music, so we're going to have to cut some of them out. Our last album was like 22 minutes, so we figure if this album is longer than 44 minutes that'll just be insane. It would be twice as long."

"We're aiming for around 35 minutes," adds bassist Kickball Katy. So you'll probably still be able to plow through the whole Vivian Girls album on your morning commute.

On the first album, the two longest, slowest songs, "Tell the World" and "Where Do You Run To", were clear standouts. The band says they'll focus more on that side of their sound on the second album. "The songs are longer," says drummer Ali Koehler. "I think it's moodier. I think we have basically the same influences as on our first album, but with more influences added."

Katy elaborates: "We have a few songs that kind of sound like the Gun Club. We have, like, a Neil Young-inspired song."

Cassie: "That's not actually an influence. We actually are using No Doubt's cymbals, though. That was an accident."

But the band is still making sure to keep the raw, fun edge that animated the first album. They're recording most of their songs in single takes, they're producing it themselves, and they're not bringing in any guests. "We haven't turned into perfectionists," says Ali.

Felt opened their last ever gig with Declaration, which starts

That epitaph is “I was second class”, which has always struck me as a resigned reflection on Felt’s commercial popularity rather than a comment on the quality of their records. Later in the gig, Lawrence changes the second line of All The People I Like Are Those That Are Dead to “Maybe I should entertain/The very fact that I’m just plain”.

After Declaration, Felt played a cover of Lou Reed's Bottoming Out, which remains unreleased.

I’ve uploaded Declaration and Bottoming Out from the Burberries gig.
Posted by Fire Escape at 12:16 pm 3 comments: 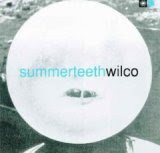 There was no hint in Wilco’s previous releases or members’ former bands and nothing afterwards that would suggest such brilliance; Summerteeth is that very rare concentration of genius over one album, exploiting all of the artists’ creative energies in one spellbinding session.

I can think of only one other band where an album has hit such intense highs that they’re spent for the rest of their career: Television with Marquee Moon, whose title track issues the immortal lines “I remember how the darkness doubled/I recall lightning struck itself”.

Wilco are so beloved of the serious monthly music magazine mafia, it was strange that the tenth anniversary of Summerteeth’s release in March passed without notice. Perhaps, though, its rich mix of 12-string guitar, mellotron and backwards piano is a bit too outré for the classic rock crew, who feel more comfortable with the more traditional country fare for which Wilco are known.

Even so, you’d think the combination of saloon-bar country and bluesy rock’n’roll that recalls Jagger and Richards in the south of France, the fried mourning of Brian Wilson as the sun set on the 1960s, and the post-punk agitation and melodic gift of Elvis Costello would ensure Summerteeth a seat at classic rock’s high table. I can think of no better album from the past ten years.

Every song on Summerteeth opens with lines that the world’s best short-story writers would kill for. It’s worth reproducing all of them here:

• The ashtray says
You were up all night

• We’ll find a way regardless
To make some sense out of this mess
Well, it's a test, but I believe
A kiss is all we need

• I, I should’ve been listening
To every word you said
Oh, what have I been missing
Wishing, wishing that you were dead

• Go back to sleep now, my darling
And I'll keep all the bad dreams away
Breathe now, think sweet things
And I'll think of all the right words to say

• Like a cloud his fingers explode
On the typewriter ribbon, the shadow grows

• Genuine, day will come
When the wind decides to run

By all accounts, Jeff Tweedy was responsible for the lyrics; Jay Bennett wrote much of the music. Legal proceedings have complicated the facts; Bennett’s death this week leaves more questions than it does answers. The biggest question of all is how come Wilco never got even in the suburbs of such mastery of touch, guile and flair after Summerteeth.
Posted by Fire Escape at 5:16 pm No comments: 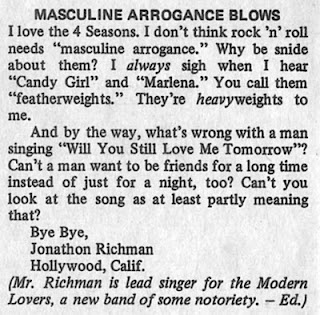 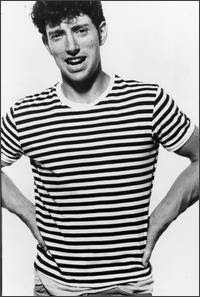 The "notorious" Jonathan Richman, published in Creem magazine, 1973 (I expect it was the magazine, rather than the correspondent himself, misspelling Jonathan).
Posted by Fire Escape at 3:45 pm 4 comments:

Lost Soul: Katie Love and the Four Shades Of Black 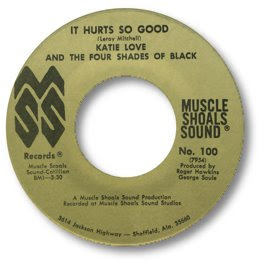 It Hurts So Good has been a big UK hit for Susan Cadogan and Jimmy Somerville; in the US Millie Jackson took it to number 3 in the soul charts; the best version by far is Katie Love and the Four Shades of Black’s 1971 original.

By contrast to the a-side’s deep soul, Don’t Let It Go To Your Head on the b-side is the sort of scorching funk-pop that’s more readily associated with the hits of Honey Cone or Jackson 5 than Muscle Shoals' southern sound where it was recorded.

NB I’ve read a few accounts that claim Susie Rainey originally recorded It Hurts So Good as Hurt So Good, but it’s a completely different song. Unless anyone knows better…
Posted by Fire Escape at 4:50 pm No comments: 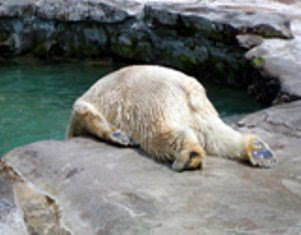 Al and Lupe are back at the Hangover Lounge this Sunday, 24 May, due to popular demand.


They'll be playing "flamenco, psychedelia, pure pop and much much more". If you were there last time they DJed you'll know how good they were; if you weren't, then this is your chance to rectify that error.

The fun starts at 2pm. And as it's a bank holiday weekend, you can drink off your hangovers in some style.
Posted by Fire Escape at 11:27 am 2 comments: 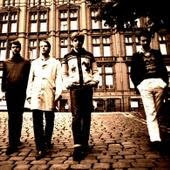 So much indiepop is influenced by Orange Juice’s playful flamboyance, waspish lyrics and childlike melodrama; very little of it has been inspired by their adoption of Chic beats and 70s soul rhythms. Welcome, then, to Bricolage whose eponymous debut album reveals a band who sound like they know how Edwyn Collins felt when he sang “Remembering with deep regret/How we used to dance in the discotheque”.

Bricolage’s finest two singles to date, Footsteps and Turn U Over, were made firmly with the discotheque in mind and really do sound as if, like Orange Juice, they’ve taken their cues from Chic’s compulsive insistency and Buzzcocks' melodic bite.

This is what Franz Ferdinand would sound like without the studied art school veneer, or what the Arctic Monkeys would sound like if they weren’t quite so fuelled by oafish pub rock. Never mind looking good on the dancefloor, Bricolage would sound great on the nation’s dancefloors.

You can also hear the soulful torch-song grandeur of Vic Godard here; in the case of Plots Are For Cemetries, perhaps a little too much as it really does half-inch the melody and mood of Make Me Sad. And, yes, a legitimate complaint could be made about including all four singles from the past three years on this album, but, make no mistake, this is a very special collection.
Posted by Fire Escape at 11:30 am 1 comment: 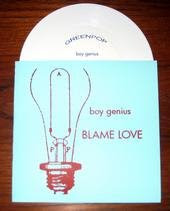 Velvet Crush’s Ric Menck told a UK fanzine in 1990 that the main difference between the British and American underground scenes was groove. British guitar groups, Menck observed, mostly don’t know how to groove.


I suspect that among the most important points Menck had in mind was America’s powerpop tradition and the musician/producer Mitch Easter.

Blame Love grooves (of course it does!); it freewheels, it cavorts, it spells out L-O-V-E (more in the manner of Orange Juice than Al Green), and it has that woozy keyboard sound that says “1967”. The b-side is a rousing, jangling cover of Miracle Legion’s The Backyard (and, yes, that grooves, too).

There’ll be another single this year and then an album, Staggering, produced by Easter out next year.
Posted by Fire Escape at 4:23 pm 3 comments: My Baby’s Got E.S.P. is a modern soul anthem. It’s hated by the northern purists – it’s even a bit too much for many crossover fans; when “dropping” this tune at any of those indiepop clubs where the audience is open to soul, this song has cleared the dancefloor. Every single time.


I used to work with an old northern soul boy who told me that Pete Waterman broke this tune. I once met Pete Waterman – I did! – and talked to him about northern soul. He pointed out that it was interesting that two of the biggest UK pop writers/producers of the 90s – himself and Ian Levine, whose greatest success was with Take That – were northern soul fans.

Where Crocodiles’ debut single, Neon Jesus, was an elemental punk thrash through Kraftwerk’s robotic hypnotics, their album, Summer Of Hate is a time-travelling trip through the 1980s.


This duo’s fuzzy, droning guitars – not to mention their Ray Bans and sulky stares – are straight out of the Mary Chain’s copybook; the reverb-drenched production is itself practically a period piece; and the throbbing electronics and uncomplicated riffs reek of the simple sonic experiments road-tested by post-punk adventurers and new romantic dreamers alike.

Song titles such as “Young Drugs”, “Soft Skull (In My Room)” and “Refuse Angels” hint at Crocodiles, like Wavves, being familiar with teenage rock rebellion’s hackneyed style; overall, though, they marshal enough substance to realise their simple techniques three-dimensionally.
Posted by Fire Escape at 4:27 pm 5 comments: