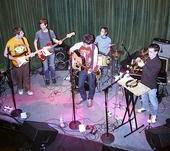 In their Soft Skin ep for Slumberland, Philadelphia six-piece Brown Recluse have made the best collection of baroque pop grandeur and harmonic soft pop this side of Fugu’s As Found.

These songs are steeped in the theatrical wonder of The Left Banke, they share the carnival orchestration of Love’s Forever Changes, they have the ornate psychedelia of The Zombies’ Odessey and Oracle, and the deft folk-pop touch of Simon & Garfunkel. Their favourite Beatle is obviously Paul McCartney.

You can download Contour and Context, and buy Soft Skin from all the usual trusty outlets.
Posted by Fire Escape at 4:34 pm 2 comments: 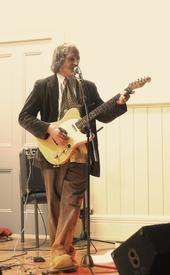 The Puddle aired a new song on a recent Radio New Zealand session. Tender Validation is brooding and spare, tiptoeing between naked confrontation and defencelessness. It reminds me of those shattered Big Star ballads.

You can listen to the session, also featuring old Puddle favourites Hudibras and Seduced By Virgins, here.
Posted by Fire Escape at 2:35 pm No comments:


Judee Sill is the subject of a tribute album released next month. She might be a little too obscure – undeservedly so, for sure – for this tribute to be a commercial success, but at the very least it will introduce a new audience to her fine albums of self-styled “country-cult-baroque”.

The video above shows Sill performing The Lamb Ran Away With The Crown in 1973 at the USC campus in Los Angeles. Tender and uncompromising as this clip is, on record Sill’s music is fuller and richer and just as mournful. Press release follows:

Judee Sill was the first artist signed to David Geffen's Asylum Records and released two cherished cult LPs, 1971's Judee Sill and 1973's Heart Food, before vanishing from the music scene and eventually dying of a drug overdose in North Hollywood, California in 1979. Though forgotten for years, her music has enjoyed a period of rediscovery since her two studio albums were reissued on CD in 2005.

In addition to cover versions of songs from Judee's modest recorded output, Crayon Angel also features TWO NEW JUDEE SILL-PENNED SONGS, for which sheet music, but no known original recordings, survive. BETH ORTON brings to life the complex and lovely "Reach for the Sky," while BILL CALLAHAN records the epic slow-burn number "Like a Rainbow," a co-write with Judee's onetime boyfriend Lal Baum (great-grandson of Wizard of Oz author L. Frank Baum - how about that?).

CRAYON ANGEL: A TRIBUTE TO THE MUSIC OF JUDEE SILL is released September 22 on American Dust.

If Phil Spector had produced Pet Sounds you expect it would’ve turned out like Hey Boy by Magic Kids – a wall of sound built from dramatic tension, feverish atmosphere, giddy female choir, pop hooks aimed directly at the top of the Billboard hot 100, lyrics from the Brill Building’s teen melodrama department and – of course – sleigh bells.

Hey Boy is released next month. You may start queuing outside the record shop now.
Posted by Fire Escape at 12:07 pm 1 comment:

Big Star: "if that isn't success, I don't know what is” 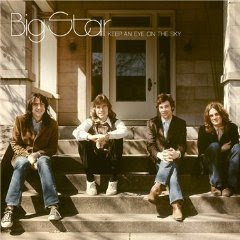 “Sure, it would've been nice to have been huge at the time. But, here we are, 30 years later, and Big Star is still playing, our music is turning up in movie soundtracks, and young people are still excited to discover the records. I mean, if that isn't success, I don't know what is.” Jody Stephens

KEEP AN EYE ON THE SKY spans 1968 to 1975 and shows the progression of Big Star through selections from such studio precursors as Rock City and Icewater; music from Big Star's acclaimed recordings (#1 Record, Radio City, and Third/Sister Lovers); and relevant solo work by group principals Alex Chilton and Chris Bell, who formed Big Star in 1971 with bassist Andy Hummel and drummer Jody Stephens. The collection also uncovers a trove of unreleased demos, unused mixes, alternate versions of songs, and a 1973 concert recorded in Memphis. 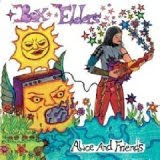 Box Elders opened their account last year with the splendid Hole In My Head single which suggested that their claim of the band being named after the insect rather than the Pavement song was a little disingenuous. Their debut album Alice and Friends, however, is a rough, ready and ramshackle affair in which almost every song triumphantly stops dead from exhaustion after about two minutes.

Whereas much of the US pop underground in the past few years seems to have been paying tribute to The Clean, Box Elders’ washes of psych organ coupled with reckless garage rock and jangly bedroom pop sound like they’re worshipping at the altar of another Flying Nun classic band, The Chills.

They could equally be, like The Chills once were, in thrall to the old Nuggets compilations. The overly slapdash execution of a couple of wayward numbers hints at a youthful exuberance just itching to hit the finishing line before attacking another song, but ultimately this joie de vivre is entirely compulsive and addictive.
Posted by Fire Escape at 4:32 pm No comments:

Grace Maxwell read from her book Falling and Laughing: The Restoration of Edwyn Collins last night at Waterstone’s in Piccadilly. It was by turns funny and very moving – many grown men noticeably had ‘something in their eye’.

After the reading, Edwyn and his band – editfeaturing his son William on guitar and backing vocals -played a great acoustic set including a new song, I’m Losing Sleep, which Edwyn described as “punk and northern soul and disco”. It sounded fantastic; you can listen to it streamed here.

At the proceeding book signing, the opportunity to clear up a criminal matter was too good to miss.
FET: My friend was burgled at university. All her CDs were stolen with the exception of Gorgeous George and The Best Of Orange Juice. Can you account for your whereabouts on February 28, 1995?
GM: Oh, I can remember what we were doing that night. Hang on.
EC: I’ve not got much of a memory now.
GM: I’ve got it. We were coming back from Australia. Do you remember, Edwyn? It couldn’t have been us burgling.
EC: Perhaps the burglar already had the Edwyn Collins and Orange Juice CDs. Or just had good taste in music!
FET: Thanks, that narrows down my possible suspects. It was probably James Kirk.
EC: Yes, you should ask him where he was!
GM: You should definitely ask James Kirk. Not to be trusted…

If the producers of police procedural drama Cold Case would like to option this story, I would be willing to listen to your offers. The soundtrack, at least, would be amazing.
Posted by Fire Escape at 12:02 pm 8 comments: