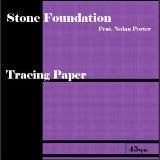 Soul legend Nolan Porter (yes, I know!) has cut a single, Tracing Paper, with the Stone Foundation. It's everything any fan of Searching For The Young Soul Rebels or Introducing The Style Council could want in 2011.


Between now and getting your copy of the 7", enjoy this film of Nolan Porter and the Stone Foundation on their UK tour last year (*kicks self for not going*).

If you were wondering where the Dunedin Sound went to, it's currently in Auckland being looked after by Ghost Wave. Hippy is a freewheelin' romp through David Kilgour's melodic maelstrom and Snapper's naggingly insistent pop art with the fx pedal stuck on buzzsaw and a dumbfuck guitar solo that is spot on.

Fans of the Mary Chain will probably take notice; fans of Surf City’s debut who were so underwhelmed by their follow-up that they only played it once (hello!) will clutch Hippy to their heart and also download the Gold demo (which sounds like a rough’n’ready version of The Clean’s In The Dream Life You Need A Rubber Soul) before demanding that at least one of the world’s leading indie labels sign Ghost Wave immediately.

When you do sign them, please make them change their name as Ghost Wave sounds like it's a niche musical genre. Don't change anything else, though. Thanks.

Posted by Fire Escape at 2:11 pm No comments:

“Rock is dead,” they said last week. “Still?” we shrugged and went to see Kings Go Forth light the fuse on their funked-up soul and burn brightly at the Jazz Cafe. The latest round of scaremongering over rock’s health focussed on the charts, a place seldom home to the very best in music and one which gives such a distorted view of music that a child of 10 could be forgiven for thinking that Sex on Fire by Kings Of Leon (118 weeks in the Top 100 and 1m+ sales) was rock’s alpha and omega.

Soul – at least Kings Go Forth’s show-stealing take on it – is alive. You might hear shades of McFadden & Whitehead’s Ain’t No Stoppin’ Us Now in Don’t Take My Shadow; The O’Jays’ Now That We’ve Found Love in Now We’re Gone; Curtis’s Move On Up in One Day. This is music that thrives on the interest from its diverse, natural capital; Kings Of Leon – a band for Oasis fans who wanted a second-favourite band after Stereophonics split up – and their ilk live cannibalistically on rock’s capital.

When Kings Go Forth covered The Impressions’ Stay Close To Me – Curtis’s first showing of the multi-faceted, driving funk and jubilant soul hybrid that would sustain his 1970s’ high watermark – they played with it, extending its two-minute length, celebrating it and adding to it. This is soul music embracing its inspiration and opening windows to the future; the problem with rock bands is their inherent conservatism, their curatorial sycophancy to their elders.

I was reminded of Joe Bataan’s ingenious cover of Tommy James and the Shondells’ Crystal Blue Persuasion, stifled by the issue of the Shondells’ album track as a single which shot to number 2. Bataan said: “Everyone’s always said that my rendition was better. I don’t want to argue about that, but we had more going on with it.”

The charts have always been mostly dead. As usual, it means that some of the most exciting music is overlooked. Try Kings Go Forth’s debut album from last year, The Outsiders Are Back, and dig out Joe Bataan’s 1970 album Singin’ Some Soul when you have a moment.
Photo credit
Posted by Fire Escape at 4:57 pm 2 comments:

The first classic of 2011 is here: The Puddle show that 25 years into their career they’re capable of writing a song that sits comfortably with the very best of their exceptional output. George D Henderson’s careworn voice is offset by guest vocalist Sharon Cunningham's sweet melody; Average Sensual Man sits somewhere between the high moutain plains of Gram Parsons and Emmylou Harris, and the bilious back-room scuffle of Microdisney when Cathal Coughlan sparred with June Miles-Kingston.

Robert Scott and Magic Dirt's Adalita Srsen team up for That’s What I Heard, a beguiling shanty that dips into the rich reservoir of doleful folk-jangle that fans of The Magick Heads will remember fondly.

This record is worth the admission price for either of these songs; to get two great songs, both of which – whether this was planned or not – are bittersweet duets which complement each other just so make this split single even more remarkable.

To all those people who sigh wistfully that NZ music peaked in the 1980s: buy this single and live in the now where the classics are being minted.

There was some minor blogosphere kerfuffle over Sweater Girls recently following a complaint that they featured “some of the worst recorded drums in pop history”. Moaning about the production values in indiepop is like going to a boxing bout and complaining about the blood.

I hadn’t noticed the drums being bad. I still can’t hear the problem now that it’s been mentioned. Even so, I like Pretty When You Smile, the Sweater Girls’ exceptionally fine second single, more now on principle.

Keen students of popular music will recognise, of course, that some of the worst recorded Drums in pop music are doing rather well with a hit album and an NME cover to their name. But that’s another fite altogher and I’m just avin' a giraffe...

Darren Hayman and Elizabeth Morris: I Know I Fucked Up

I Know I Fucked Up from Darren Hayman on Vimeo.

It’s too early to declare a winner, but Darren Hayman’s collaboration with Elizabeth Allo Darlin’, I Know I Fucked Up, is going to take some beating when the votes are counted after his project writing, recording and releasing a song every day this January is done.

Fans of rain-soaked miserablism (“You know I love you but you got me so mad/You were the best friend I almost had”), romantic subterfuge (“I tore pages out of your books/I wrote words where I knew you would look”) and, uh, footage of indiepop stars in their socks (29 seconds in) will not be disappointed.

I must conclude, reluctantly, that I Know I Fucked Up is marginally better than the proposal I put forward to Darren: record, with Elizabeth, a cover version of Allo Darlin’s Darren, and retitle it Karen, to go as a companion piece with Hefner’s Lee Remick in tribute to The Go-Betweens’ first single. That would, Darren cautioned, be a little Being John Malkovich.
Posted by Fire Escape at 2:50 pm No comments:

Just as the American onslaught of Shop Assistants copyists is dying down, Southampton’s The Notes have a go at turning girl group pop upside down. Their Wishing Well album is a refreshing take on a familiar template, drawing as deeply from saturnine post-punk (particularly, any number of crepuscular Factory releases that slipped through the floorboards) as it does from the pop-punk canon.

The joke doing the rounds was that Sunday at this year’s London popfest was going to be Youngfuck, Middle-Aged Fuck (14 Iced Bears) and Who Gives A Fuck (tbc). Now The Notes have been added to the line-up, everyone’s going to give a fuck and the bill could more accurately read The Notes plus some other fucking bands.
Posted by Fire Escape at 4:41 pm 4 comments:

Lord Echo – aka DJ Mike Fabulous from New Zealand – could just as well have called his Melodies album Lord Echo Meets Rockers Down Under. The Rhythm 77 that opens this album signals that crates have been raided for dub and disco dominance; funk flavours, African highlife and Latin rhythms are added to create an intoxicating rush that’ll take you back to Kid Loco’s first records in 96/7.

The biggest hit on the album is a version of Sister Sledge’s Thinking Of You. If this gets a vinyl release it’ll conquer the world.