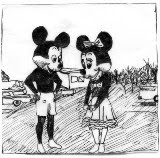 Let's Wrestle are back! I am all over their new single Crushing Nerves, which is released on 18 October by Tough Love; it's a split with Young Governor (aka Ben Cook from Fucked Up) who offer Old Hat, improving this record's value-for-money (record company executives: please take note of this lesson).

London three-piece Let’s Wrestle and Young Governor, the solo project of Fucked Up guitarist Ben Cook, first met while touring the US together in 2009. Since Ben hates touring, he barely spoke to Let’s Wrestle, and he assumed they thought he was a huge dick. But Ben soon realised they shared common ground when he saw Let’s Wrestle leave a show drunk with the drummer on the roof of their car. 15 minutes later they were in jail. Since then they’ve bonded over nothing but shared roll ups, something less common in Toronto, where Ben is from.

This may be apocryphal, but it's entertaining (press release writers: please take note of this lesson).
Posted by Fire Escape at 11:27 am 1 comment:

A teenage gang from Los Angeles, Moses Campbell get their kicks from pop music (“we don’t have guns, at least we have our songs” they sing on New Country). Their sloppy but poppy approach comes across like the Magic Kids busking, brings to mind I’m From Barcelona back when they were fun and recalls The Mountain Goats’ rugged passion.

If the title of their debut album, Who Are You? Who Is Anyone?, suggests that Moses Campbell are young enough to be still wrestling with life’s unanswerable questions, then the pathos and clattering instrumentation are pulled off with such joie de vivre to win over even the hardest cynics.

The Puddle - Playboys In The Bush

The Puddle exist in isolation – not just from their Flying Nun peers in New Zealand, who can be bracketed as either the jangly Dunedin sound or as obtuse art-rock, but through George Henderson’s outsider status. Curious, then, that Playboys In The Bush starts with What I Believe, which has a hint of The Bats’ North By North.

That, though, is the only concession to The Puddle’s homeland bands. There are, of course, suggestions of other bands in their songs: The Smiths (Rainbow Bridge Airlines), The Kinks and T-Rex (English Speaking World), The Velvet Underground and Roxy Music (In Dreams), The Clientele (Sleepy People (Remember Dreams)), and Microdisney (Monogamy). The only common thread to these songs and the album as a whole, though, is that no band other than The Puddle would’ve dared imagine that such a configuration of ideas and ambitions could be organised into a pattern of psychedelic pop.

Playboys In The Bush was recorded five years ago. If it had been a lost album by Julian Cope – another outsider – then its release would have precipitated excited magazine features. Cope will probably feature it as an Unsung album of the month sometime in the next decade.

Craig Phillips of The Cavalcade, whose recent gigs have shown an appreciation of The Puddle’s blistering psych-pop, has made a video for English Speaking World.

Posted by Fire Escape at 2:55 pm No comments:

Foster The People: Pumped Up Kicks

Pumped Up Kicks may have been the song of the summer for those who downloaded it months ago; vinyl fetishists can enjoy an Indian summer this week with its 12” release. Calling it 2010’s Young Folks is a fair shout – it’s catchy, it’s got whistling – but its chances as a crossover hit probably lie more in the tradition of Drinking in LA and Scooby Snacks than they do in the indie novelty genre. That and a vague similarity to the strutting bass of Billie Jean won’t do it any harm.

Mark Foster probably grew up listening to the ho-hum-shake-your-bum hip hop of A Tribe Called Quest and Arrested Development. He may even have watched The Virgin Suicides and thought ‘Air’s soundtrack is pretty good, but, hey, one day I’m gonna write a song about abuse and murderous vengeance and totally own those French dudes’. And he did.

Squalls of feedback and a deranged pop attack greet Harry Dolland’s, the lead track from Fluffy Lumbers' second ep. This is gloriously messy DIY splendour: my best guess is that if a mixing desk was used in the recording process then either no one knew how to work it or several pints of beer were spilled on it. Gradeschool Fantasy on the flip goes for the disturbingly dark and nervy casio-psychedelic effect that fans of the TVPs’ The Painted Word rightly hold close to their chest.
Posted by Fire Escape at 11:56 am No comments:

Pack away your Mazes singles, put the For Ex-Lovers Only record back on the shelves, get over the Unnatural Helpers and imagine what the Pains of Being Pure At Heart would be like with their recording budget decimated: for noise pop there’s only one stop and that’s Big Troubles, whose Worry album hits every sweet spot and features Freudian Slips, possibly the biggest and best single of the year. Fans of Box Elders, Real Estate, and Fergus and Geronimo will not be disappointed. 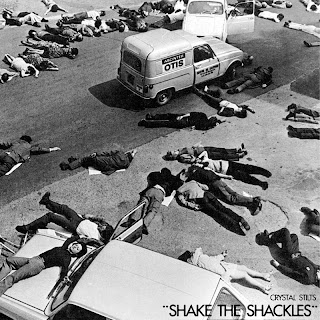 Crystal Stilts make a triumphant return with Shake The Shackles: broodingly intense, menacingly claustrophobic and subtly anthemic, there's an outside chance they've been listening to the first House of Love recordings.


Warning: the blues and quite possibly Echo and the Bunnymen may have influenced the b-side, Magnetic Moon.

A new album is due early next year.
Posted by Fire Escape at 1:19 pm 1 comment:

Edwyn Collins and The Artisans

Edwyn Collins is starting a new club, A Night With The Artisans, which launches next Wednesday, 15 September. There's a press release, which is bookended by lines from the Orange Juice song The Artisans:

"At the best all the rest are just also-rans
When compared to the fabulous Artisans...."

West Heath Yard presents A Night With The Artisans, a new monthly club hosted by Edwyn Collins and James Endeacott. The opening night is Wednesday 15th September at The Luminaire in Kilburn and trails an exciting joint venture between these two legends of indie: a record label and lots more besides - all centred around West Heath Yard, the home of Edwyn's world famous studio. Appearing at the first night will be The Kinbeats from Frankfurt via Kilburn and The Onlookers from Canterbury, Kent. As well as DJ sets from Edwyn and James, the night will feature other treats and surprises, the start of things to come. . 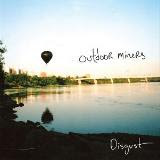 Seeing as how Outdoor Miners got everything right on their first ep, they’ve used the same tactics on their second:

• Second song - more of the same

• Third song – country-psych ballad sounding eerily like it should have been on Pavement’s Crooked Rain (put Friends With Money between Gold Sounds and Range Life and you’d make that album better, no contest)

If Outdoor Miners’ first record was them sticking their flagpole in the international underground’s territory, their second is this Canadian band waving and shouting to get noticed by more people. And you should take notice, really you should.
Posted by Fire Escape at 10:32 am 3 comments:

The Transatlantics: Couldn't Be Him 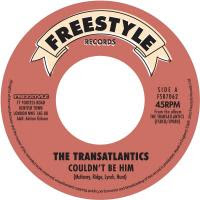 The Transatlantics channel the spirit of Willie Mitchell in Couldn’t Be Him for a slice of sweet southern soul that’s steeped in the Hi Records vintage sound. This record wouldn’t be out of place next to the Ann Peebles or Al Green greats of the early 70s and is further confirmation that 2010 is the year for classic soul releases.
Posted by Fire Escape at 1:04 pm No comments: