Following a recent post offering the b-side of Ripe's ridiculously rare Summershine debut for your delectation, an Australian correspondent very kindly sent me a demo version of that song, The End, as well as Ripe's hauting cover of Big Star's O, Dana.

Thanks to Jim for passing on these MP3s; you could do far worse things than check out his band, Tugboat, whose beautifully composed reflections are suspended in the shadows left by Galaxie 500.
Posted by Fire Escape at 2:49 pm No comments: 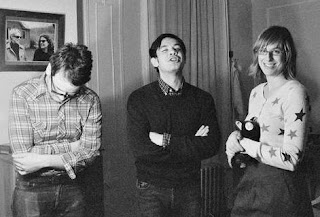 Knight School's debut album, The Poor and Needy Need To Party, rattles deliriously through 14 tracks in under 25 minutes. All unforced charm and rough-hewn pop sensibility, they take their cue from the Television Personalities (1980 vintage) with their clumsy clattering and wry humour (check out one of the many highlights, Mrs Tambourine Man, for proof).

A non-album track, Death And The Cleaning Maiden, on the Skatterbrain compilation suggests they've an affinity with The Verlaines, but really, like much of the best new music from the American undergound, the menacing post-punk atmosphere is closer to The Clean's blueprint.

Knight School's glorious amateurism and wide-eyed wonder will take you back almost 20 years to the days when Slumberland 45s carried inserts declaring the releases were available from "cooler record stores"; they'll also remind you of fellow Brooklynite's Cause Co-Motion!'s basic garage rock; but they're closest in spirit and endearingly ramshackle execution to the TVPs' best work.
Posted by Fire Escape at 3:23 pm 2 comments:

Pipas and Clientele DJs at this Sunday's Hangover Lounge

Lupe from Pipas and Alasdair from The Clientele are guest DJs at the Hangover Lounge this Sunday at the Salmon and Compass on Chapel Market in Angel.

The fun starts at 2pm. Our superstar guests have indicated that between laying down Galaxie 500 b-sides and Forever Changes outtakes they will make themselves available for autographs, glad-handing and small talk.
Posted by Fire Escape at 3:12 pm No comments:

Singles Of The Year (so far) 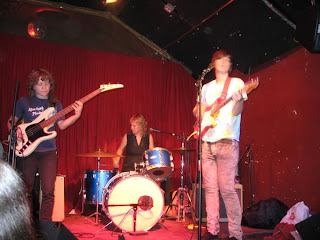 Brilliant Colors
This sounds familiar
Oh, do keep up. The Vivian Girls were so last year. Like fellow Californians Dum Dum Girls, they’re much better. This is the sound of 2009.
2009! Are you sure?
Yeah, like many American bands at the moment they revere the Shop Assistants as a deity.
Do they like anyone else?
Their debut ep would’ve fitted right in on the Narodnik or 53rd and 3rd rosters over 20 years ago next to The Fizzbombs, Beat Happening, Baby Lemonade, Talulah Gosh…and, yes, the Shop Assistants.
What’s their best song?
Should I Tell You is a discordant rumble through the VU back catalogue via the Modern Lovers’ proto-punk angst with thrift store fx pedals and a ten-dollar recording budget. It’s worth its weight in blood diamonds. 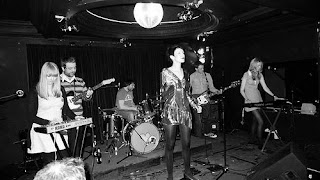 Help Stamp Out Loneliness
They’re the best new band in Britain, aren’t they?
Fuck yeah!
Why are they so good?
Irresistible pop tunes matched with Teutonic iciness, Serge Gainsbourg’s insouciant sauciness and Stereolab’s bewitching electronic riffs.
Sauciness, you say?
Record Shop is a hymn to booze and oral sex:
“Baby are you all alone tonight
I could come around and eat you up
Have you got some wine to wash it down with?”
What’s their best song?
The b-side, Record Shop, is a darkly theatrical invocation to a pop star from an obsessive fan.
B-side?
Fair point. They write nothing but a-sides.
So they’ll be massive?
The clever money’s on them being number one in Germany and France this Christmas. Not sure if they’ll be taken to their homeland’s hearts quite as much, but they’re worth starting a civil war over.
Posted by Fire Escape at 5:34 pm 2 comments:

MJ Hibbett at the Hangover Lounge. Free! This Sunday! 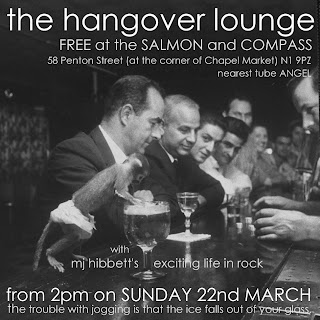 MJ Hibbett performs his exciting life in rock this Sunday at the Hangover Lounge. An even more exciting electronic brainstorm between your correspondent and MJ happened this morning:

FET: Is there any value in wringing the comedy cloth until a slightly tortuous 'MJ sells out 45 dates at the O2, here's your chance to see him free at the Hangover Lounge' is produced? If there is, then perhaps you could produce from your comedy weaponry the BIG GUN which will explain how excited you are to be playing to your biggest fans, eyeball-to-eyeball, in an intimate venue.

MJ Hibbett: Morning! Here at my international media centre I have a selection of exciting words for all occasions:

MJ Hibbett has supported Echo & The Bunnymen on the ukelele[sic], had an album of the year in Rolling Stone, written a book that got his editor fired, stayed out drinking longer than Nick Cave and Shane McGowan, run naked through Glasgow hotels and had an International Hit with a song about computers that made him famous in Norway and IT Departments all over the world.

He’s going to be telling the story behind these adventures and more in his new one-man show My Exciting Life In ROCK where he’ll be performing songs such as The Lesson Of The Smiths, Do The Indie Kid, Hey Hey 16K and his legendary cover of Boom Shake The Room!
Posted by Fire Escape at 2:31 pm 7 comments:

The School play acoustic this Sunday at the Hangover Lounge - free 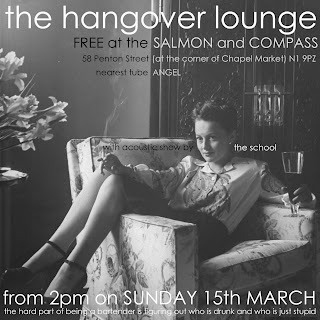 The School are playing a free acoustic show at London's Trendy Hangover Lounge this Sunday. 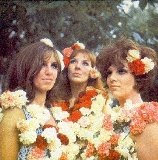 This time around, ISY regulars Brogues and Andrew are joined by Mike Slumberland and yours truly. Here’s what we came up with:

You can download it here.
Posted by Fire Escape at 9:07 am No comments:

Wake The President "You Can't Change That Boy" 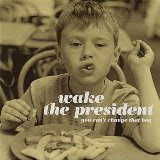 There are a lot of bands making music like Wake The President; there are very few who are doing it quite so well as them. Where many bands sound like a cackhanded tribute to Belle and Sebastian’s first two albums, Wake The President have the rich melodic textures of Maurice Deebank-era Felt, the chiming guitar pop of Aztec Camera and the whip-smart lyrical pen of Edwyn Collins.

Wry smiles all round at the titular pun of Just Give Me Two Secs when the yearning bedroom indiepop has the refrain of “just give me to sex” and on the early Orange Juice soulful pop of Miss Tierney which has the knowing line “imitation is the sincerest form of flattery”.

Miss Tierney is their finest moment to date and the grand centrepiece of this confident debut. It’ll be released as a single next month and will undoubtedly bring WTP to a larger audience. New fans will be richly rewarded by You Can’t Change That Boy; long-term fans, however, might feel a little short-changed that all three previous WTP singles are also included on this ten-track album.
Posted by Fire Escape at 9:09 am 3 comments:

You heard. Wednesday 29 April at the Betsey Trotwood, with support from the Middle Ones and Sly Hats. All for a fiver. Don't spare the horses.
Posted by Fire Escape at 9:08 am 2 comments:

PENS and Wavves and Crystal Stilts

I had a hunch that this gig would be, like the Pains of Being Pure At Heart in February last year at the Buffalo Bar, the gig of the year. I was wrong. But it was still bloody good.

PENS were magnificent. Their shortcomings - and this inept trio have many - serve them far better in the darkened surroundings of a basement bar at full volume than they do in the studio.

They swap instruments and take turns at singing because, well, none of them are that proficient at any of them, so it doesn't matter and why not go out in a blaze of glory in every song? It's more fun that way.

And this was fun - fifteen minutes of non-stop pop being smashed up and stamped on. They announce one song as a cover version. I have no idea what song they were covering. My guess is that the PENS girls were all covering different songs. The gig was over in a heartbeat. I want more.

Wavves, conversely, sound nowhere near as good live as they do on record. Here's a clue: there are two of them, a drummer and a guitarist, one's wearing a white shirt, one's wearing a red shirt, and they're playing garage rock. I never liked The White Stripes, so I'm never going to like an imitation.

They do, though, nail their sound spectacularly well on about half the numbers - frenzied hubba bubba pop caught in a gale of feedback - but half the time the lack of studio jiggery-pokery reveals the cracks in their armour.

Crystal Stilts had come in for some flak on this UK tour, with many criticisms being levelled at the singer for not being able to sing. Had none of these critics heard the records beforehand? Complaining about the singer's tunelessness is like going to a U2 gig and complaining that the singer's a cunt with a Messiah complex.

I hadn't seen Crystal Stilts' earlier UK dates; perhaps they were poor on those. On the last night of this tour, they were immense. Darkly atmospheric, richly melodic, casually louche and demonically powerful, I was overwhelmed.

Yes, one song did sound a bit too much like the Mary Chain and one too much like Joy Division, but I'd heard the records beforehand so I won't complain.
Posted by Fire Escape at 4:39 pm 5 comments: