The Hit Parade Vs Miaow

“We get people coming to talk to us, but there aren’t many who do things like fling their knickers on stage which is a bit unfortunate as I’m a bit short of underwear at the moment – I’m medium by the way readers.”
Cath Carroll

The Hit Parade's sixth single, I Get So Sentimental, was released in a publicity blitz in the spring of 1987. At the same time, Miaow's second single, When It All Comes Down, was issued in the type of media fanfare usually reserved for royal weddings, world cups and Jesus corporeal return on a cheese and onion crisp. 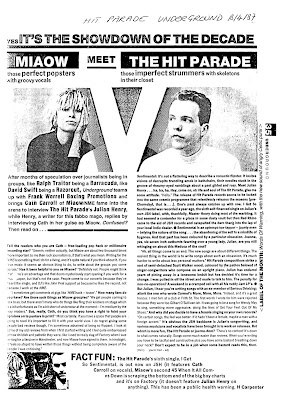 Underground magazine celebrated the occasion by getting the musical brains behind the singles, moonlighting journos both, to interview each other. International recording star Julian Henry of west London's titans of teen The Hit Parade, and sultry Mancunian indie poster girl Cath Carroll, grill each other above. And below some other hacks offer their considered opinions of I Get So Sentimental. 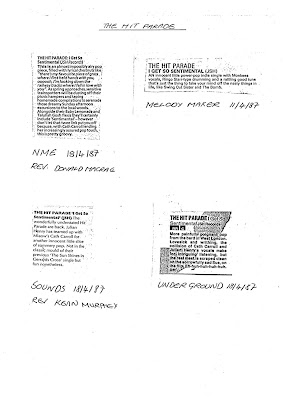 What's not to love? Although I do hope that your public declaration of love is in some way a plea for JH to find time in his schedule of lunches, launches and hob-nobbing to write and record some songs with you. FireEscapeTalking: making the world a better place.

gee, i remember that Underground article. All my copies of the magazine went missing in action years ago, and occassionally (like now) i miss them terribly.