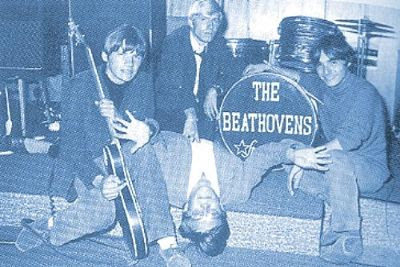 The weekly summer song series continues its way through what now feels like the season’s dog days with the appropriately mournful Summer Sun by The Beathovens (mp3 fans go here), a wistful couple of minutes spent contemplating the sun setting on a love affair while Ray Davies, somewhere in the background, kicks himself for not first crafting this absolute beauty.

I have this on the triple(!) CD, Stora Popboxen, which came out 11 years ago. Very shortly after buying it, more than one Swede scoffed at me for my financial profligacy as, apparently, the record shops of Sweden were overflowing with unwanted, heavily reduced copies.

For those of you in Sweden, then (and I know there are such people out there, as there are readers from many nations, who bring a much-appreciated international flavour to this blog), perhaps the EEC Stora Popboxen mountain is still to be found in the record emporiums of your homeland. It’s worth getting one. This is the standout track of the 89(!) collected, but there are many gems therein. The liner notes contribute this information about The Beathovens' Summer Sun:

In the mid-1960s Ray Davies of the Kinks, with his acoustic guitar and nasal voice, could have patented the word “melancholy.” Just think of songs like “I Go to Sleep,” “Let the Bells Ring,” “Too Much on My Mind,” and “Sunny Afternoon.”
But then the Beathovens came along with “Summer Sun,” a song with a tight but effective production, where Bengt Anderssons voice and the lyrics communicate a feeling that autumn is approaching, a feeling of lost love and moments gone forever.
In Sweden it would be almost 10 years before John Holm succeeded in communicating something similar in “Den Öde Stranden” (“The Deserted Beach”).
But why keep writing, when the radio keeps tormenting us with “Sommaren är kort” (Summer is short).