There have been numerous stories of late about vinyl’s resurgence. Kids, apparently, have discovered some of the joys of 7” singles, even if the main joy they offer – being played over and over again as you, spellbound, watch them spin round as they magically transmit sound – is denied to the kids as they don’t have record players.

As ever in culture, there is nothing the media’s gatekeepers like more than relating all aspects of contemporary music in the terms of the 1960s. Blur Vs Oasis, you will remember, was just like The Beatles Vs The Rolling Stones (whose single releases never clashed, who never had slanging matches with each other and who both featured members who’d read some books); Kids Buying 7” Singles is just like the 60s, apparently, cos that’s what kids did then.

Back in the real world, however, the vinyl revival has been happening for over a decade. Let’s go back to Oasis, who from their 1994 debut, Definitely Maybe, established a tradition of the vinyl being issued as a double. For a new band, the idea was to presumably give them an air of provenance, of existing in the same rarefied atmosphere as their heroes of old.

What has been rather tiresome is for every subsequent album to come out on double vinyl. This overuse of vinyl has its roots in the 12” single boom of the 70s. Then record company executives discovered they could release a single in a larger format and charge twice the money for it. They only had to include another b-side – some cast off always did the trick – or slip an anonymous German who had a passing familiarity with Kraftwerk a few quid to do a new-fangled “remix”. Kerching!

Vinyl’s revival has been accompanied by similar money-grabbing motives. The louder the audiophiles’ argument has become and the more support it has gained, the readier are record companies to issue albums on vinyl. You will notice, however, that this readiness coincides with vinyl’s market occupying the same high moral ground compact discs held in the 80s – they sound better.

I agree that there’s a case to be made that since the democratisation of compact discs – they’re so cheap now! they’re (almost) free on the cover of every music magazine! they’re free inside newspapers most weeks! – there has been a movement towards vinyl as a premium commodity. However, it is equally true in all aspects of commerce this century that concomitant to globalisation’s encroaching reach is a return to simpler, older, often niche, forms of produce.

Like compact discs in the 80s, you will also have to pay a premium for your vinyl now. This is why record companies are so ready to press vinyl albums – there’s more profit per unit. This is why there are stacks of new labels devoted to reissuing old albums on vinyl and doing very well out of it, too. What it might mean for buyers of a certain vintage, however, is that it’s the third time they’re buying the same album. First time on vinyl when it came out, then replaced by a compact disc, and latterly on 180g vinyl (quite likely the weight of the original, but don’t let marketing get in the way of the truth).

For this buyer, he never lost his love of vinyl. He fetishes it, in fact (the records only, in case you’re afflicted with an image of me in bondage gear). Some friends have thought me stupid over the years, and I admit my very late adoption of CD technology might have made me miss out on some decent music, but as the owner of Minus Zero said to me as I bought the recent Midlake album (fucking great, since you ask, but avoid previous efforts for their prog love, I am strongly advised): “That’s worth what you just paid for it, and still will be in 5 years’ time. The CD’s value goes down by 90% as soon as you take it out of the shop.”

But then I’ve never bought new records for the collectable value. I buy them for their music, because they look fantastic and because I can think of nothing better than sitting watching it spin round and magically transmit great pop music. You can’t tell that to any independent label, though. Every new release in the past decade has been a “limited edition”.

I’ll tell you why it’s been a limited edition of 500: that’s all you’ll fucking sell, pal. Press 1000 and it’ll be 500 copies going to the landfill megastore. Where’s the ambition in advertising that you’ll only try to sell 500? And where’s the independent labels’ love of their audience if they patronise their faithful customers so much by telling them they must buy the single immediately. It’ll still be on sale until you buy it, as it’s only you and the other 499 regular punters who are ever going to buy it.

Major labels, with the rise in popularity in guitar bands (let’s not call them indie, shall we?), push out two versions of the 7” with different b-sides for that all-important “straight in at number 29” spot. Still, by selling them at 99p each, the only bank it’s going to break is the band’s.

The most stupid story, of course, is this week’s about some press whores who’ve released 100 copies of a 12” at £100 each. Yes, but what does it sound like? No one appears to know, or care, in all the headline-grabbing press that it’s got. 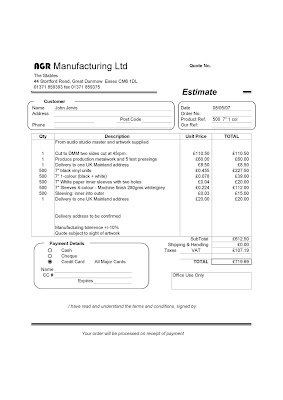 WIAIWYA Shrag Balance Sheet
The reality of the situation for the indie record label is shops still expect to sell singles for a couple of quid. WIAIWYA, a label where breaking even is a foreign land, have kindly given me the details of the last Shrag single costs. And that’s before the mixing’s been paid for. You can see why these people lose cash.

I’m just getting used to singles costing a lot more this year. Last week, Douglas Armour’s Prince Of Wands, a spirited essay in the fiery jangle of ealy REM kissed by the magic of the Californian sun, set me back £4.79. But then there were only 750 of those (and it's an import). This week, Swing Your Heartache by Young Galaxy – feel that Galaxie 500 atmos! – is £3.29. But then there are only 100 of those (“available to this country” anyhow).

You know, they’d both be cheaper if there were more copies. But the cold, hard facts of this kind of record shopping are that not many people get it (at first, anyway) so the unit prices are necessarily higher (unless you expect to pay less for a single than a pint and think that all indie labels should lose money). And the finer things in life – great pop music on 7” being one of the very finest – can cost a little more. Plus I’ll only be buying it once, anyway. Oh, thanks for asking, my record player of choice in recent years is this beauty. Sounds great. Especially when you play great 7” pop singles on it.

Anonymous said...
This comment has been removed by a blog administrator.
9:41 am

I love Young Galaxy A LOT

I only know the single, but that's certainly baking my biscuit. Has there ever been a "shoegaze" element to their music? I'm a bit fidgety around the so-called shoegaze revival.

Agree about the 500 copies thing. As someone who is starting a small label - the first 3 releases are 7" only singles - yes limited to 500 each. And if they sell that many I will be happy - but the limited aspect is purely down to the fact that we can only afford to make 500 of each single. We're doing it because we love the bands, we love the format and we love the music. I expect to lose money on each release. But money is not the point, the music is.

Hi Trevor. Maybe I didn´t make myself clear enough. My problem is with indie labels advertising singles as "limited edition" as a marketing tool, adopting the promotional language of the major labels. Using the same logic, all releases are a "limited edition" of whatever number is pressed (new James Blunt single limited edition of 250,000, for example). Most indie singles are pressed in runs of 500 because that´s what they´ll reasonably sell, not because it´s a limited edition marketing tool.
Good luck with the label. I´ll certainly be buying your releases.