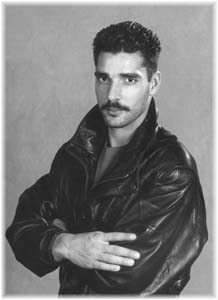 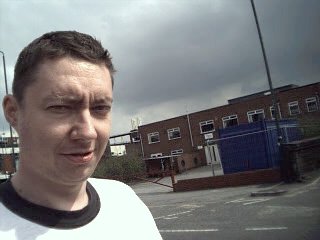 John Jervis before and after he started an indie record label and was on first-name terms with Greg Webster. Form an orderly queue, ladies.

John Jervis, CEO of Maidenhead’s - if not Berkshire’s – premiere independent record label, Where It’s At Is Where You Are, has brought you, the grateful listener, the sounds of Action Biker, Doug Shepherd, Miss Mary and Psapp, as well as diverse Grammy-winning country and western artistes*.

We’ve all seen John propping up the bar at the Water Rats, hands trembling under the weight of CDRs, disposable camera and pints of cider, but few outside his close circle of confidants has managed to penetrate his security cordon and discover the real John Jervis.

FireEscapeTalking managed just that. In the spirit of investigative journalism, we went armed with a tape recorder, a can-do attitude and the questions that you want asked – and we came back with some answers.

With your very big house in the country, heated swimming pool, chauffeured helicopter and prize collection of vintage 19th-century French lithographs, just how do you manage to stay in touch with the kids?
with warmed palms...

People are talking about Love Is All who are Quite Good, but they’d be nothing without you who nurtured them as Girlfrendo, would they?
oh, they bleedin ROCK... and they'd rock whatever... even lily allen LOVES them... and that's a GOOD thing...

Why did your board of directors reject the aggressive takeover attempt by Fortuna Pop?
AGGRESSIVE???... we're indies...

Which act would you most like to have signed that you haven’t?
jonathan richman, nick heyward, lou reed, huggy bear, riviera f, fort dax, or, failing that, anyone who sells more than 2 records to chelmsford postmen...

Which act have you signed that Fortuna Pop most wanted?
sportique

Matinee have dropped Airport Girl. Will you do the same?
REALLY??... Haha... Nope... I love carport girl... and what I’ve heard of the new record is fan-bleedin-tastic too...

Are the rumours circulating about you and Billie Piper true?
what are they?... i'm sure they'll keep me warm in the coming cold winter months... aah... billie piper... sigh...

If I said you had a beautiful body would you hold it against me?
i would question your eyesight and judgement, but it depends how cold the coming winter months are, and whether you wore a billie piper mask......

Do you ever put out bands because you fancy one of them and think you might get a shag?
why else would you release sportique records?...

Visit http://www.wiaiwya.com/records.html to buy all of your WIAIWYA releases, but ignore the Maidenhead postal address there as John’s moving to London to take over the capital’s music business. Good luck, John!

*We made that bit up about the Grammies and the country and western (apart from The Smith Garrett Band, who are C+W, but so far Grammy-less), but the records are all really good. Obviously.
Posted by Fire Escape at 11:07 am