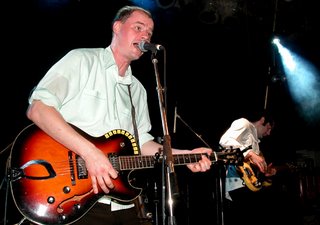 Halfway through the year and we can confidently say all bets are off: 2006’s greatest album has been made by Dan Greene of The Butterflies of Love. You remember them - the American Go-Betweens: one pop writer (Dan) and one creator of oddly infectious ballads who can’t decide whether he’s Bob Dylan or Dean Martin (Jeff).

Dan has lived up to Jeff’s oft-repeated, utterly convicted and slightly awestruck description as “the best songwriter in the world”. He’s assembled a band, The Mountain Movers, and made two albums about the afterlife, 24 songs about heaven and hell; the first of these opuses exploring innocence and experience harnessing the grandiose, maudlin magic of The Zombies’ Odyssey and Oracle, trapping the warm soft pop of California, 1967, and reconfigured in the soulful light of Memphis, GA, will be released by Fortuna Pop! later this year* featuring the tracks:

Dan has very kindly agreed to give you a preview, so please enjoy Not Quite Yet, starring Mark Mulcahy on backing vocals.


First up this autumn will be a new Butterflies of Love album on Fortuna Pop! (and if you haven’t got a ticket for their London show on August 31, get one here).