The Vaselines - birth of a legend 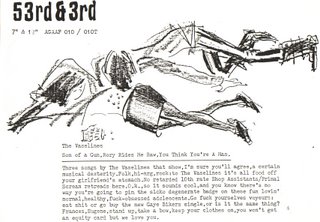 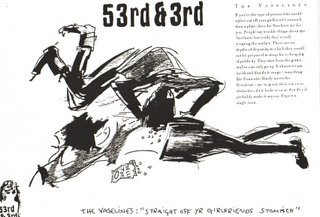 "People say terrible things about The Vaselines, but really they're only scraping the surface."

We all know now that The Vaselines changed the course of popular music because Nirvana covered them (or something like that anyway), but before they strode the music world like a colossus of HiNRG synths and screeching punk rock guitars, preaching their sermons of sex, perversion and sexual perversion with religious themes, Frances MacDonald and Eugene Kelly were 'marketed' as "fun lovin', normal, healthy, fuck-obsessed adolescents". I am certain that even today you want to hold them to your breast and gaze adoringly at their cute, upturned faces.
The scans here are the press releases to the test pressing of their debut single (15 May 1987) which was then called "Straight Off Yr Girlfriends Stomach". Sometime between then and the actual release date of 14 August 1987, the EP title was dropped, but the attitude, I think you'll find, remained.
Posted by Fire Escape at 11:13 am