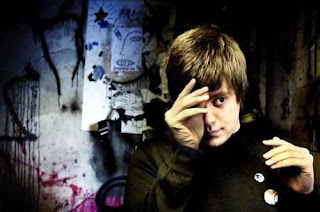 What kind of a name is that? Not a real one. Montt Mardie is the nom de pop of Swedish bloke David Pagmar.
What kind of music is that? The light bounce of the Pale Fountains, early 70s horn-filled soul, the classic pop of Burt Bacharach and a basic reading of Dexys in 82. He’s even got a song called Come On Eileen.
But not a cover of it? No. It’s a cover of Håkan Hellström's Kom igen Lena, which was itself inspired by Come On Eileen. Calling his cover Come On Eileen is not a bad joke by rock standards. Less amusingly, perhaps, he covers Rhianna’s Umbrella in Swedish, Paraply.
Genius or madman? Set Sail Tomorrow is quite clearly the work of pop genius. The b-side, a duet with Jens Lekman, quite clearly isn’t. Much of Montt Mardie’s work will appeal to fans of the el label, although he claims to be influenced by Duran Duran and Joy Division.
Yet more oddness! Quite. The Duran influence is evident in the 80s production of songs like Highschool Drama, but if Mr Pagmar has ever heard a Joy Division record, he certainly forgot about it when he entered the recording studio.
I don’t get it. Do you like him or not? I fuckin’ love Set Sail Tomorrow. I’ll reserve judgement on his other material.
Posted by Fire Escape at 12:21 pm