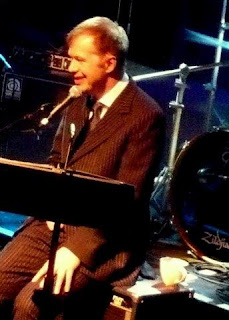 It's exciting times. I used to analyse and reflect on my life. But dysphasia left me in a corner. So now I do everything with gay abandon.

Edwyn’s London gig this week was a rare treat. Encouragingly, he looked and sounded stronger, his dysphasia was less pronounced and he was generally more confident than last November’s Arts Theatre gig.

Best of all was the reaction of his eighteen-year-old son, Will, who watched the gig from the side of the stage, sang along to every word, gave encouraging thumbs ups to pa, danced gleefully, went into raptures at every one of Roddy Frame’s guitar solos and, in what is obviously a family trait, clapped along out of time. He looked, justifiably, like Edwyn's biggest fan and the proudest son. Well, if your dad had invented indiepop and written a ton of amazing songs, you would be. 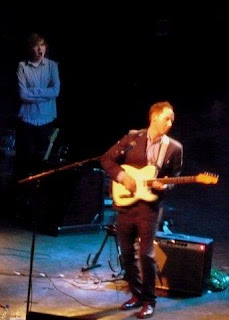 I was pleased that Roddy Frame wasn’t as much of a showpony at this gig as he was last year. Whether he had been told to tone down his exaggerated – and faintly nauseating – swivelling, thrusting and strutting and let Edwyn be the star of the show, or if he had been over-compensating for Edwyn’s more subdued presence last year, we’ll never know. But it was Edwyn who was the star.

Will Collins singing along

When someone called for an Aztec Camera song, Edwyn declared, "This is an Orange Juice and Edwyn Collins gig," you knew he was back and all the better for it.

Photos by Mrs FET
Posted by Fire Escape at 10:28 am