Polaroid Pictures and The Lucksmiths 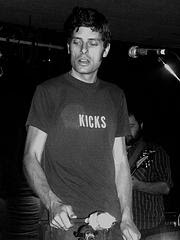 The news that Polaroid is stopping manufacture of its famous instant film products consigns, in one cruel stroke of the corporate pen, Hey Ya! to the dustbin of pop history.

What in 2003 seemed not just like the greatest pop song of the year, but the very future of pop music itself, has now become outdated due to the lyrical instruction:

Admittedly, Andre 3000 was probably aware that amateur voyeurs had progressed from the Polaroid to the mobile phone or the camcorder to capture their more intimate moments, and was even five years ago using the Polaroid as part of Hey Ya!’s rather retro feel.

But in a few years’ time, a new generation will never know what it means to shake it like a Polaroid Picture. Unless they’re taught by Tali White, Lucksmiths singer by night, schoolteacher by day and standard-bearer for traditional values at all times, who here covers the song.

When Tali sings "Now ladies I want to see you on your baddest behaviour/Give me some sugar I'm your neighbour", you can almost forget that his CV reads “can play the guitar, can sing and can count to ten. I would make a perfect presenter for PlaySchool”. Almost.
Posted by Fire Escape at 2:28 pm

I guess I'll have to stop referring to paranoid people (e.g. Rangers and Cetlic fans) as 'polaroid'. Another bad line bites the dust. I hope cashew nuts don't go extinct because I still haven't got tired of saying, "Have you got a cold?", whenever anyone says the word 'cashew'...

Brogues! Wake up! Bobby Davro's stolen your identity and is posting excerpts from his olde joke book under your name...

Ha ha! He dreams of having material that sharp. I thought that 'cashew' joke up all by myself. It's my 'Dad Joke' for when I have kids. Hopefully it'll get as many groans from my kids as my dad singing "Salmon chanted evening" whenver anyone said 'salmon' did from me :)