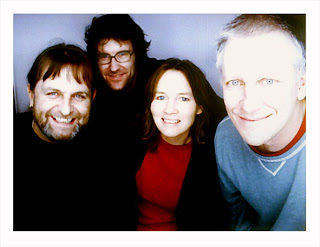 Rattling folk-rock, driving jangle pop and keening vocals: it’s Minisnap, who in Bounce Around have made what masters of understatement would call “a classic album”. It really is that good.

Minisnap are essentially The Bats without Robert Scott; while removing a songwriting great (hey, did you hear 2005’s At The National Grid album? What a return to form that was) from a band would normally spell disaster, Minisnap reveals Kaye Woodward to be a songwriter of enormous talent in her own right.

Their debut ep, 2002’s In My Pocket, saw Minisnap finding their feet. It was a promising rather than strong debut, in part due to the use of a laptop, but proved it’s difficult to go wrong when you’ve got Paul Kean on bass. No one in the world, I swear, can nail a bass line so distinctively. 2004’s March Hare ep was stronger still, but it’s with Bounce Around, and the addition of an extra guitarist, that’s seen Minisnap develop into genuine contenders.

Bounce Around is full of punchy euphoria and dreamy-eyed pop, like Neil Young at his best, and the heart-stopping melodic charm and crisp delivery you always think The Shins would make if they were as good as people say they are (or as good as Minisnap in fact are).

You can hear a lot of late 80s indie in here, and not just the obvious Flying Nun comparisons: listen to Innocent and you’ll hear a guitar solo that J Mascis would sell his soul all over again to have written.

They’re playing the Windmill in Brixton on 25 April. I can’t find any information about a tour, but you’d expect more dates in the UK at least…and if they can persuade Robert Scott to come along, then The Bats could play. What a double header that would be...
Posted by Fire Escape at 3:47 pm

Agreed! Such perfect pop songs. I love this album!

Bounce around is great: Crooked Mile is wonderful.

I really hope they'll play it in Wellington on Saturday.

This should be a hit. I've read some comments as to why it took Kaye so long to step out of the Bats. If this had been made any earlier, we wouldn't have this as it is. You can hear the life experience in these songs yet at the same time there's a fresh innocence about them that is extraordinary. One of these rare miracles that makes one glad to be alive. Thank you.