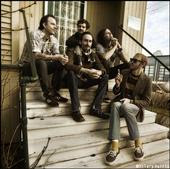 It’s been a good week for Beard Rock (you know, music made by men who like their whisky strong, their guitars sweetly melodic and gently countrified, and their shirts of a coarse plaid, worn open-necked; beards are optional, but pretty much the norm).

Grand Archives have in their debut album, The Grand Archives, delivered the perfect follow-up to Wilco’s Summerteeth (which was nice of them to do, seeing as it’s been nine years and Wilco still haven’t come close to that magic). This gem of a record goes from the Neil Young raggedy rock of Swan Matches to the careworn, backwoods folk of A Setting Sun that Teenage Fanclub mastered on Grand Prix, to the dolorous chiming of the funereal Index Moon that recalls the best of Michael Nesmith (and his best, I’m sure you know, is classic).

The whistling on Miniature Birds (don’t you just love these titles?) reveals the simple, irresistible pop impulse of Grand Archives; even better, Louis Reil is a dead ringer for Joe Pernice’s very best output (I’m talking about the Overcome By Happiness album and Clear Spot in particular).

The See See add the psych folk of their debut single, Up The Hill, to the Beard Rock card, but it’s the b-side, Citadel Shuffle, that really scores. Remembering The Byrds in 68, the aching lament and passionate urgency of REM in 83 and any number of psychedelic nuggets from hazily stoned nights, Citadel Shuffle marks The See See out as ones to watch.
Posted by Fire Escape at 2:48 pm

You've done it again Fire Escape Talking. I've gone and bought another album on the back of reading about it here and then listening to some more Grand Archives elsewhere. A lovely place Seattle, too. There was a very good Elvis impersonator busking on the waterfront last time I was there. He had the clothes and he had the moves anyway.

I'm relieved that I haven't been the only person seaching for the perfect follow-up to Wilco's "Summerteeth" all these years. Your earlier recommendations of The Mountain Movers and Minisnap were spot on too. keep up the good work.

All in a day's work, chief. Glad to have been of service!

Did you know the See See singer (ex Eighteenth Day of May)Richard Olson is from Lund/Malmo!
and used to be a member of the Sleeping Flies (Kindercore) and the uLTRA wIDE bAND with VED (Mattias Nihlen), Jivaro (Henrik Dahl) and Michael Evill (The Music Liberation Front Sweden)!

No, I didn't know that. I'll be back in Malmo in the summer DJing at So Tough So Cute again. If Richard's in town then, it'd be great if he could make it along.