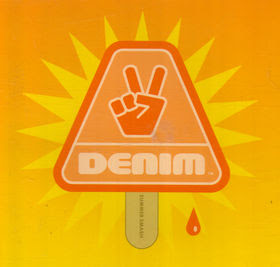 Cause i think i'm gonna come

Straight in at number one

And stay there all summer


It didn't happen like that, of course. Summer Smash was being played on daytime Radio 1 in August 97, the charts were beckoning and the insanely catchy summertime ditty was shaping up to be the most glorious holiday chart invasion until some Hello magazine fare got themselves killed in a car crash.

Summer Smash was subsequently deemed unsuitable during a time of national mourning (me? I was down the pub wearing bright colours, thanks very much). EMI shelved the release and Denim were dropped as Summer Smash was another failure for the band and label. That's the official story anyway.

The unofficial story that a few people "in the know" have told me over the years is that EMI wanted to drop Denim and Summer Smash was the excuse to do it.

Still, you can now

And you'd be a fool not to listen to the b-side, Sun's Out. This great number considers a holiday in the seaside town of Paignton on what is laughingly called the English Riviera. There are at least three Devonians numbered among this blog's readership, so perhaps they can regale you about Paignton's charms.

It may help your listening experience to know that this 7" single is pressed on ice-lolly effect lime-coloured vinyl.
Posted by Fire Escape at 10:06 am

Never been to Paignton myself. Nothing bad with Devon seaside towns town. Even though I sometimes get the feeling that we live in the LIDL among them...

Ugh. There are some HUGE typos in that post.

The Sun's Out download doesn't seem to work. I only get a 1kb file

Sorry, Daniel; I'm on holiday at the moment so won't be able to fix that until I get back in a week's time.

Is there any chance you could fix the Sun's Out link?

I've trying to find these tracks for years. They are quite fun, if more "Novelty Rock" than "Denim On Ice".