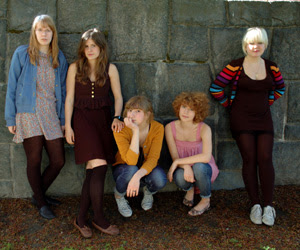 Those Dancing Days hit the ground running in 2008 with Hitten, mixing candy-floss pop with an insistent 60s soul groove. Like The Pipettes when they're good. Or Girlfrendo, who were always good.

It's far, far better than last year's eponymous single, but their other songs on myspace suggest that Hitten is something of a flash-in-the-pan. I suppose you can't really trust a band named after a Led Zeppelin song...

They'll probably never be this good again, but if they're going to be a one-hit wonder then Hitten is one hell of a way to be remembered.

For those of you who like press releases, this is the official bumf:

Those Dancing Days return with a new single, the ineradicably infectious ‘Hitten’ will be released through Wichita Recordings 28th January 2008.‘Hitten’ is the follow up to the self-titled debut single ‘Those Dancing Days’ released in October 2007.

‘Hitten’ or in its English translation ‘The Hit’, will be released on the following formats as well as a digital download.

They also return to our shores at the end of the month to play the following UK shows:

Formed in Nacka a suburb of Stockholm in 2005, Those Dancing Days mixture of girl group charm, Northern Soul and Hammond driven pop surfaced in the winter of 2007 and is about to lead them to be one of the most talked about new bands in eons. They have been described as, ? and The Mysterians fronted by ex- Sugarbabe Mutya Buena and not one of them over the age of 20! Those Dancing Days are currently on tour in Europe and begin recording their debut album in December due for release in 2008.