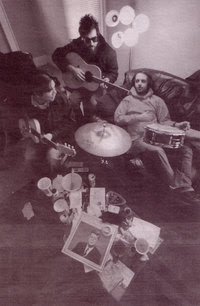 Just when you thought America was about to spend the next decade staring at its shoes through lank hair and playing terrible dirges that go on for years without ever getting close to a tune, SHITGAZE is here to save us.

It’s not the most, uh, appetising genre name, I agree, but drastic times – people all over the USA are acting like shoegaze never happened! It did, and we in the UK lived through it so that others don’t have to again – call for drastic measures. You might prefer – as I do – the epithet Practice Rock, or even a description like Uneasy Listening; whichever way you put it, right now this is essential listening.

Psychedelic Horseshit – again, not the most appetising name – sound like those vital early post-punk releases from Flying Nun. Think of the barbaric, corrosive nihilism of The Gordons' Future Shock, and the jagged, penetrating, caustic tunes of The Clean’s Boodle, Boodle, Boodle ep and imagine them recorded on a primitive Dictaphone in a damp basement and you have the breathless invigoration of Psychedelic Horseshit's new album, Magic Flowers Droned.

Short songs played fast, great tunes fucked up – you just know how good Bad Vibrations with its Beach Boys influence is already, don’t you? Fuck yeah! This is the sound of the Jesus and Mary Chain playing Dylan rather than Spector, of My Bloody Valentine’s raw feedback and melodic impulse recorded quickly in one take, and of a world where The Blue Orchids mean more than The Fall (and that world is always a better place).

Psychedelic Horseshit’s hometown (Columbus, Ohio) sparring partners Times New Viking – not much effort, you suspect, was spent thinking up that name – have got the commercial end of the practice rock scene stitched up by signing a deal with Matador. If you want to hear early Pavement tunes fed through a two-dollar amp and beaten to a bloody pulp (and why wouldn’t you? It sounds, of course, fucking fantastic!) then make TNV your port of call. Round my way, though, it’s Psychedelic Horseshit every time. Hmm. Wonder if they do t-shirts? I’d like to impress friends and colleagues at all Christmas functions this year.
Posted by Fire Escape at 12:20 pm