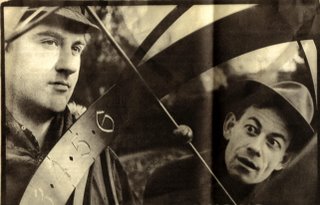 The Television Personalities’ history is shrouded in pop legend; what facts we do know, we treasure as one of the classic stories of punk’s influence on Britain’s unruly kids. However, what we had assumed as gospel – a bunch of youths from the wrong side of the tracks, or the poor bit of the King’s Road, Chelsea, led by a teenage 60s pop fan infected with punk’s enthusiasm, all claiming to be famous television personalities on the single they sent to John Peel – we can now reveal is a smokescreen to hide us from the real truth.

We now know that The TVPs were not inspired by London’s fire-in-the-belly punk scene, but by an eccentric Transylvanian conceptualist, Curt Replies, that the band included a failed child actor and jazz percussionist, and Melvyn Bragg was mutilated by a stray bazooka and retired to the Orkneys.

This press release for the TVPs' classic Smashing Time - did they ever make a better single? - from 1980 tells us the astonishing genesis of the band we've come to love as the smacked-out, maverick, genius, oddball survivors from 1977 (that describes Dan Treacy anyway). 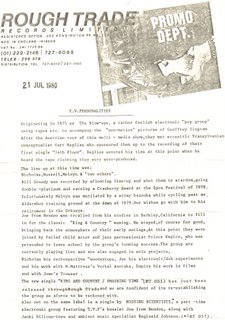 On a different note, I heard that Lawrence, these days of Go-Kart Mozart, had gone to ground and last night's gig wouldn't be happening. Does anyone know if this is the case? If it was cancelled, then you can bet he won't be turning up for his slot at How Does It Feel To Be (insert own old/twee/drunk/all of the above joke here) on Saturday. I'm reminded, though, of a nice link between the TVPs and Felt. I'll let Dan do the talking:

“We played a 14-mintue set supporting Felt in Greenock last year (1989), all covers…I was signing autographs backstage, everyone thought I was a member of Felt. All these tearful teenage girls getting souvenirs because Felt was splitting up. You know Lawrence hardly ever smiles? He was killing himself laughing, I was scrawling my name all over these girls’ Felt albums.”

I related this story to Lawrence at Water Rats a few years ago. He didn't remember Dan scrawling on girls' Felt albums, but he certainly found it funny second time around as well. He did ask where Dan was living at the time - to my knowledge then it was the hostel in Soho; for some time during his stay there, he had been frequently selling parts of his record collection to Reckless in Berwick St to fund his predeliction for drugs - and said that he knew the hostel well (I can't say Lawrence ever stayed there, but he might have had the odd acquaintance with the druggy milieu in his time...).

I've heard that Domino have given the TVPs a lot of money to secure them for a few more albums. Again, I will offer you Dan's words from 1990:

"Rough Trade gave me loads of money to distribute 'Privilege' and forgot to sign a contract. Fire offered me a deal, so I took that as well. Then Rough Trade wanted their money back. They didn't get it, it's their fault. Very naughty of me..."

Now I know the true story - always wondered a bit about them working for Led Zeppelin. If you would like a copy of the TVP tribute volumes 1 and 2 just drop me note.