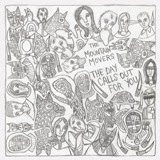 Recorded pretty much live to two-inch tape, The Day Calls Out For You has the rarefied air of an album that’s been excitedly uncovered by collectors after decades of obscurity. If you played it to those collectors, they’d be likely to believe it was such an artefact. With only 270 copies made, it’ll be changing hands for serious money among future collectors. And it’ll be worth every penny. Get yours today.
Posted by Fire Escape at 7:40 pm