The Devil Has All The Best Tunes 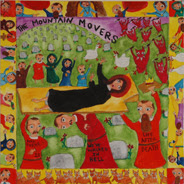 With his new side-project, The Mountain Movers, Dan Greene from the Butterflies of Love has drawn deeply from Muscle Shoals's horn-driven soul, the darkly theatrical flourishes of Love’s Forever Changes, the orchestral pop of Beulah’s When Your Heartstrings Break and The Zombies’ psychedelic masterpiece Odessey & Oracle to create a visionary album about the afterlife, We’ve Walked In Hell And There Is Life After Death, that in terms of quality stands shoulder-to-shoulder with its classic inspirations.

Obviously, this is the best album of 2008 (if a greater one comes along, then the world’s a better place than we thought; that, or another Mountain Movers album gets released).

This album is about the afterlife and hell. Dan, have you turned into a goth?

Edgar Allen Poe was always easy to identify with...Heavy metal too-- at least lyrically. Always was a bit Goth in storytelling and drawing. I like paintings with a medieval feel. Mostly though I write love songs around Catholic themes. That's what Irish-Americans from Massachusetts do.


There's also an album about the afterlife and heaven. Is there a great musical difference between the two albums?

Well originally there were 12 hell songs and 12 heaven songs. Just seemed too much for a debut album. Slapped 12 together from each aisle. The title made more sense though when it was 24 songs. 12 hit the editing room floor.

Any more MM projects after these afterlife albums?

Yes, plenty more. We are recording a ten-song, 35-minute record right now in Brooklyn. Did 4 days of playing and now we have to mix. These are most of the songs we have been playing live, and none are the ones from the editing room floor.


Jeff (Greene, BoL other singer-songwriter) mentioned to me once that you write songs virtually every day and have written hundreds of unreleased albums. Is this true?

I am always in the middle of working on some collection of 10-14 songs that I demo on the 4track. Got about 35 "records". I suppose that is a lot of songs considering I didn't start writing songs until I was 24. The jury is still out on what percentage of that stack of songs are redeemable.

Do you rely on friends telling you which are the best songs to release?

That is where Jeffrey shined. He is also helpful in being a threshing floor when selecting songs.


The brass instrumentation is very different to BoL. Do the Mountain Movers represent something you felt you weren't able to do with BoL?

I never thought, "Man the Butterflies are amazing, but if they had a horn section it would put it over the top." I just ran into the horn section when they were recording at Scotty's (organ for BoL) studio. I decided to record there too. They listened to the songs and pressed the red "record" button.


I thought Famous Problems was the best album of 2007. Can we expect some new BoL material after the MM album?

I thought it was the best record of 2007 too. Many will in the future. As for our future, we usually let time lapse and then get together to start working on a new project.

There was a time (1999/2000) when BoL were a name on the lips of many critics and pop fans. Why do you think the BoL haven't crossed from the promise of the 'next big thing' to the actuality of the current big thing?

Hey man, The Butterflies will always be the "next big thing" cause we write nothing but hits, but they only seem to hit certain people at certain times.

Do you think the MM are a more commercial proposition than the BoL?

No. The underground is just fine.

Can't wait to come to London.

There’s a demo of This Last Hope you can listen to. Pretty good, no? The final version is even better. Buy We’ve Walked In Hell And There Is Life After Death in February from Fortuna Pop!
Posted by Fire Escape at 10:58 am

Thanks for bringing this group to my attention. I'd never heard of them before reading this. The interview interested me to check out the linked tune... which impressed me enough to get me to check out the MySpace link... and the songs there convinced me to buy the album straight away. I love it when that happens. Can't wait to hear it all now.

No problems. You'll love the album. Say, are you from NZ? I'm trying to find a decent place to get new releases from NZ and can't source a good mail order outlet.

That's probably enough to be going on with.

It's been ages since I've come across something in this way that's just been such an obvious must-have impulse buy. It's that classic US songwriting with a lovely voice (without the mannerisms that afflict so many of todays young popstars, yep, I'm talkin about you Beirut) quirky arrangements (but not too quirky they distract from the songs... talkin about you Beirut again) and great lyrics and themes. The first thing it made me think of was The Band but I know there are many further layers of this particular onion to be peeled.

Thanks. Smoke and Amplifier I knew about, although the former's rather ominous warnings about customs charges always put me off a bit. Still, the new Verlaines and Minisnap albums must be bought... If there's anything else new from NZ you reckon I should know about, please tell.

Try this one too: http://www.newzealandcds.com/

I haven't used them but they seem to have a good range I've noticed a few out of print old Flying Nun albums loitering around in their catalogue.

If you like the old FN sounds then the new David Kilgour is worth checking (The Far Now - make sure you get the NZ edition which has a bonus CD with the best of the previous two albums and unreleased stuff). The Clean have just been back and playing here and recording a new album...

Otherwise check out names like Bachelorette and the Ruby Suns and the labels L'il Chief, Arch Hill and Powertool Records which between them have continued the spirit of the Nun.