I’m all in favour of Rough Trade East. It’s an easy walk from my flat, it’s open late so I can go after work and it’s just round the corner from Beats Workin’, an ace second-hand record shop on Sclater St run by my mate.

The downside from a purely personal point of view is that I will probably be in debtors’ jail before Christmas. The only reason I ever went to west London was to the Rough Trade shop on Talbot Road (now, of course, there’s the Luminaire venue to draw me westwards); even so, I didn’t go that often.

You might think not going often was a little stupid when I tell you that I think it’s the best new record shop I know, but it usually meant a weekend visit when the decks would almost always be hogged by pseudo-DJs working through piles of 12”s. Plus it’s in west London and I didn’t want to end up in debtors’ jail. 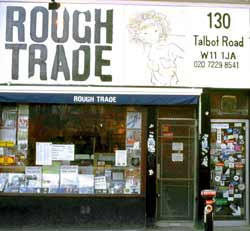 Rough Trade East, then, gets a thumbs up for its location. As for the shop itself, it’s currently badly under-stocked. The “5,000 square foot megastore” is just too big for the present stock which relies heavily on piling multiple copies of one record in the racks. As for the 60s/70s Country section, all but one of the albums being by Johnny Cash is a bit lame. Have a Johnny Cash section by all means, but don’t pretend you know about country or stock it when you’re so limited in your outlook.

These, though, are simple problems which I imagine – well, I bloody hope – will be overcome soon. More problematic is the design of the shop. Rough Trade in Talbot Road conjures, to my mind, the most iconic image in independent record shopping; I’m certain many others feel the same way. With such a brand, very little needs changing. Why, then, have the RT Shop brains decided to create not so much a shop as another trendy Shoreditch “space”? They’ve sacrificed their iconic status for anonymity. For shame.

Still, I christened the shop by “dropping” £85. I’ll be back this week for a more modest spend. And every week until debtors’ jail.

The 7” stock is, as you’d imagine, excellent. Pick of the bunch last week was Trust by Gravenhurst which – I kid you not – is a dead ringer for Cling Film by The Sea Urchins. These are strange times we live in. The b-side reveals shoegazing tendencies which don’t fill me with joy; in fact very little of the so-called shoegazing revival gives me much pleasure, although a single I got last year, Forever by Shade, is worth checking out

You will probably want some pop now, so on the Trust theme, A Question Of Trust, the debut single by Their Hearts Were Full Of Spring from a couple of weeks ago is a joyous, infectious piece of indiepop that’ll make your heart beat a little faster.
Posted by Fire Escape at 4:32 pm