Simon Aurell of Fanfarlo - who have just released their marvellous debut single on Fortuna Pop - has quite rightly stepped up to the plate as a Contemporary Pop Star of Stature to answer a Beatles' fan's love letter from 1964. 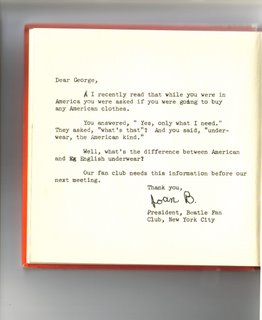 Dear George
I recently read that while you were in America you were asked if you were going to buy any American clothes. You answered, "Yes, only what I need." They asked, ""What's that?" And you said, "underwear, the American kind." Well, what's the difference betweens American and English underwear? Our fan club needs this information before our next meeting.

Dear Joan B,
What mainly distinguishes American underwear is that it seems to be worn on the head a lot.
Thank you,
Simon

As Joan B's been wating 42 years for her answer, and her fellow fan club members must be getting a little impatient by now, we asked a proper American what the difference was. Neil O'Brien, Butterfly of Love, the tallest member of a very tall band, raconteur and gentleman, said:

"About the american kind of underwear, I haven't the slightest. Am I supposed to make a joke? Boxers & briefs. Maybe he meant the kind without any holes wore in them."

Hope that helps, Joan. Good luck with the meeting.