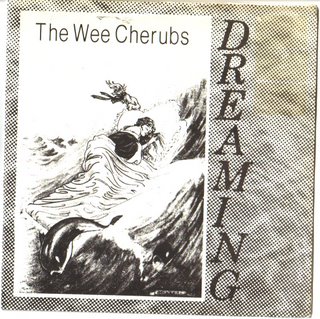 The Wee Cherubs' Dreaming is one of the holy grails for indiepop collectors, gaining mythical status in its scarcity (consensus suggests 400 copies were pressed) and not having been reissued. I haven't been able to find an MP3 on that there net, so to put various people out of their misery, please listen to it here.

Recorded in October 1983 by Martin Cotter (guitar, keyboards, vocals), Graham Adam (drums), Christine Gibson (bass, backing vocals) and Gail Cherry (backing vocals) and released the following year on the Bogaten label, the song was written by Cotter, who later formed the Bachelor Pad, who also included Christine Gibson and Tommy Cherry who I'm presuming to be a relative of Gail, or quite possibly the same person given the enlightened sexual peccadilloes of rock musicians.

As you can see from the photo, the Wee Cherubs hail from a time when wearing shorts was de rigueur for any band to whom guitars shared equal importance with keyboards and/or horns and strings (see also: Orange Juice, The Pale Fountains). 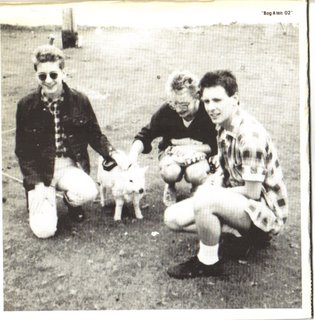 Hi, Loved the Anoraky in the UK article. Is there a chance you could repost or mail me the Wee Cherubs song since it doesn't seem to work
Cheers
//Daniel (trapphus on last.fm)
danieln[at]kajen.com

I'll repost it tonight. I have a feeling that ysi files expire after 7 days...

This link should work

Graham Adam (pictured) was also in the bachelor pad.

Even rarer demos DO exist and I have them. I will post them infrequently as videos on Youtube. Starting TODAY!